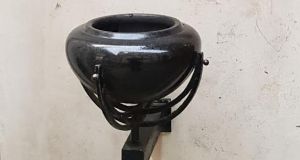 Earlier this week the Health Service Executive issued a guidance for churchgoers, advising that holy water fonts should not be used and the sign of the peace should be suspended.

People at one Dublin church this week were still dipping their fingers into holy water fonts and blessing themselves, despite warnings to the contrary.

While all the holy water fonts inside St Teresa’s Catholic Church on Clarendon Street appeared empty, one font at an entrance off Grafton Street, probably full of rainwater, continued to attract dippers with alarming regularity.

“Just, as I did it I just... Oh my God,” said a shocked Therése from Co Mayo, when what she had done was pointed out to her. “Because I would do it under normal circumstances.”

Earlier this week the Health Service Executive issued a guidance for churchgoers, advising that holy water fonts should not be used and the sign of the peace should be suspended. Priests have been advised to give the congregation permission to “nod” or “smile” instead.

Therése said she was aware of the warnings. “I don’t think I’ll be upset because I believe God will take care of us, please God.” The virus “has made me realise how important faith is. If we hadn’t something like this to really believe in, people are going to get upset, very upset if this gets worse”.

“O Jesus! ” was the reaction of Marion from Mount Merrion when stopped mid-dip. “You’re leaving the church and you’ve forgotten the rules,” she said.

Her friend Patricia from Malahide, who had also dipped her fingers in the holy water font, instantly produced hand sanitiser from her seemingly magic handbag. “Disinfectant!” she announced, “lovely perfume. Can I give you some?” A grateful Marion accepted. “Yeah,” she said, “it’s lovely.”

When The Irish Times pointed out that it was probably rainwater anyway, Marion from Mount Merrion pondered,“you see you think you’re doing the right thing. Because you think, ah sure lookit, it’s holy water”.

Then Marion posed the question that haunts so many these days: “Are we going over the top?”

Along came Richie from Crumlin who, dipping his fingers too, was taken aback when The Irish Times remonstrated “you know they’re trying to stop people from doing that?” His response was a pithy: “Are they?”

And Micheál from Tipperary, who dipped his fingers entering the church and leaving it, excused himself with: “Habit, I suppose, going into the church, you know. It’s a custom, I suppose, automatic I suppose.”

At the evening mass inside Fr Tony Parsons told the congregation that, in line with directions from Archbishop of Dublin Diarmuid Martin, there would be no handshake at the Sign of Peace, and Communion would be received “in the hands and not on the tongue. “So please come and receive in your hand as reverential as you can.” And they did.