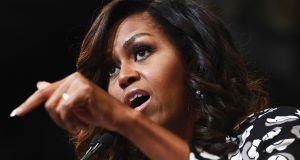 Michelle Obama has told of her dismay that so many American women chose “misogynist” Donald Trump as their president instead of the first female nominee of a major party, Hillary Clinton.

In her new memoir, Becoming, which is published on Tuesday, the former first lady admits that some news stories now “turn her stomach” and, as her husband Barack Obama’s legacy is aggressively unravelled, sometimes wonders “where the bottom might be”.

The couple spent election night 2016 at the cinema in the White House. “As the movie wrapped up and the lights came on, Barack’s cell phone buzzed,” Obama writes. “I saw him glance at it and then look again, his brow furrowing just slightly. ‘Huh,’ he said. ‘Results in Florida are looking kind of strange.’

“There was no alarm in his voice, just a tiny seed of awareness, a hot ember glowing suddenly in the grass. The phone buzzed again. My heart started to tick faster – I watched my husband’s face closely, not sure I was ready to hear what he was going to say. Whatever it was, it didn’t look good. I felt something leaden take hold in my stomach just then, my anxiety hardening into dread.”

Obama could not bring herself to stay up through the early hours watching the climax on TV. She went to bed, hoping to “block it all out”. As she slept, the stunning news was confirmed: Trump would succeed her husband as president. She admits: “I wanted to not know that fact for as long as I possibly could.”

The couple’s daughters, Malia, who was in Bolivia, and Sasha, who went off to school in Washington, were both “deeply rattled” by the result, she recalls. “I told both our girls that I loved them and that things would be okay. I kept trying to tell myself the same thing.”

The former first lady, now 54, refrains from second guessing whether Russian meddling, FBI director James Comey’s intervention or flaws in Clinton’s campaigns brought about Clinton’s loss. She admits: “I am not a political person, so I’m not going to attempt to offer an analysis of the results. I won’t try to speculate about who was responsible or what was unfair.

“I just wish more people had turned out to vote. And I will always wonder about what led so many women, in particular, to reject an exceptionally qualified female candidate and instead choose a misogynist as their president. But the result was now ours to live with.”

That afternoon she went to her office in the East Wing where her entire staff had gathered. It was made up largely of women and minorities, including several who came from immigrant families. “Many were in tears, feeling that their every vulnerability was now exposed,” she writes.

But she and Barack Obama were “determined to make the transition with grace and dignity, to finish our eight years with both our ideals and our composure intact”. On January 20th, they welcomed Trump and his wife, Melania, to the White House, then proceeded to the 45th president’s inaugural stage in front of the US Capitol.

“The vibrant diversity of the two previous inaugurations was gone, replaced by what felt like a dispiriting uniformity, the kind of overwhelmingly white and male tableau I’d encountered so many times in my life – especially in the more privileged spaces, the various corridors of power I’d somehow found my way into since leaving my childhood home. What I knew from working in professional environments is that sameness breeds more sameness, until you make a thoughtful effort to counteract it.

“Someone from Barack’s administration might have said that the optics there were bad – that what the public saw didn’t reflect the president’s reality or ideals. But in this case, maybe it did. Realizing it, I made my own optic adjustment: I stopped even trying to smile.”

Some are urging Obama to consider her own run for the White House. A recent poll from Axios by SurveyMonkey found that if she made a bid for the presidency in 2020, Obama would have a 13-point advantage over Trump, while media entrepreneur and TV host Oprah Winfrey would have a 12-point advantage.

But in the epilogue of her memoir, which offers insights into her upbringing, education and attempts to balance a career with family, she once again moves to quash such talk. “Because people often ask, I’ll say it here directly: I have no intention of running for office, ever. I’ve never been a fan of politics, and my experience over the last ten years has done little to change that.

“I continue to be put off by the nastiness – the tribal segregation of red and blue, this idea that we’re supposed to choose one side and stick to it, unable to listen and compromise, or sometimes even to be civil. I do believe that at its best, politics can be a means for positive change, but this arena is just not for me.

“That isn’t to say I don’t care deeply about the future of our country. Since Barack left office, I’ve read news stories that turn my stomach. I’ve lain awake at night, fuming over what’s come to pass.

“It’s been hard to watch as carefully built, compassionate policies have been rolled back, as we’ve alienated some of our closest allies and left vulnerable members of our society exposed and dehumanized. I sometimes wonder where the bottom might be.”

She also takes a swipe at Trump’s campaign launch in June 2015 in which he branded Mexican immigrants as “criminals” and “rapists”, setting the tone for his divisive campaign and presidency. “I figured he was just grandstanding, sucking up the media’s attention because he could. Nothing in how he conducted himself suggested that he was serious about wanting to govern.”

Obama launches the promotional tour for her book on Tuesday in Chicago where tens of thousands of people have bought tickets to attend an event moderated by Winfrey. Becoming is part of a joint book deal with Barack Obama – whose memoir is expected next year – thought to be worth tens of millions of dollars, a “significant portion” of which will go to charity. – Guardian