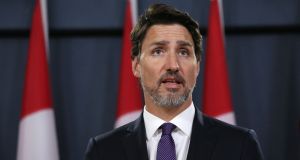 Justin Trudeau: He and his team mounted a frantic late effort to secure votes – but it was too late. Photograph: Dave Chan/AFP via Getty Images

When Justin Trudeau was first elected in 2015, he promised that his victory would help Canada vault back on to the world stage, and reclaim a global influence that had eroded in previous years.

“To this country’s friends all around the world, many of you have worried that Canada has lost its compassionate and constructive voice in the world,” Trudeau told a raucous crowd on election night. “Well, I have a simple message for you. On behalf of 35 million Canadians: we’re back.”

But Trudeau’s marquee foreign policy gambit has ended in disappointment, after Canada lost its bid for a temporary United Nations Security Council seat. In a single round of voting on Wednesday afternoon, Ireland and Norway secured the required two-thirds of votes, edging Canada into third place.

It was Canada’s second failed attempt to win the seat, and experts believe it raised serious questions about the messaging and clarity of the country’s foreign policy.

Ahead of the vote, Trudeau tempered expectations, telling reporters that regardless of the outcome, Canada was “moving forward and leading the way” on issues such as climate change and a feminist foreign policy.

But in the final days, the PM and his team mounted a frantic effort, phoning leaders in India, Pakistan, Mexico, North Macedonia and Fiji, to secure votes.

For those closely watching the campaign, the last-minute push was likely too late – and the messaging from Ottawa too confused.

It was only in February, months before the vote, that Trudeau and a small delegation visited Senegal, Ethiopia and Germany to pitch Canada’s candidacy. The prime minister had a planned trip to the Caribbean to court regional leaders, but scrapped the visit amid a wave of protests at home.

“If you had five years, why would you wait so long for these trips and meetings? You need a really long runway to build goodwill and relations with other states that would get to the kind of guaranteed outcome of a security council seat. It’s not an easy thing to do,” said Mark Kersten, deputy director of the Wayamo Foundation.

Norway and Ireland, meanwhile, had been laying the groundwork for their campaigns for years, and on Wednesday secured 130 and 128 votes respectively. Canada took 108.

Canada had spent more than C$2 million (€1.3 million) on the effort, far more than Ireland. But the money was hampered by an unclear message.

“We’re supposed to have a feminist foreign policy. To me, that means that every single decision that’s relevant to Canadian international relations should be examined through its gender dimensions,” said Kersten.

“Are we doing that? I don’t necessarily see that with Saudi Arabia or our relations towards China. ”

Meanwhile, Canada’s public commitments to human rights and economic equality, were severely compromised by its defence of the engineering giant SNC-Lavalin, which has admitted fraud and bribery in Libya.

For decades, Canada branded itself as a peacekeeping nation, drawing on a long history of intervening in conflicts around the world. But those efforts have eroded significantly in recent years, and current commitments are at a 60-year low.

“There definitely is a big gap between rhetoric and reality,” said Thomas Juneau, a professor of international affairs at the University of Ottawa.

Canada’s mission in Mali, its largest in nearly a generation, lasted one year.

“The mission really reinforced the perception that we wanted to ‘tick a box’ – as opposed to really doing the heavy lifting,” said Juneau.

Wednesday’s surprise defeat, is likely to raise questions about the government’s effectiveness in managing its messaging abroad.

“Another foreign affairs failure for Justin Trudeau. Keeps the streak alive! He sold out Canada’s principles for a personal vanity project and still lost. What a waste,” tweeted outgoing Conservative leader Andrew Scheer.

Juneau held out hope that the loss would prompt a re-examination of Canada’s “dilettante” foreign policy.

“Canada has long found a way to avoid taking clear positions on many issues. That [would] have been more difficult with a security council seat, because of the higher expectations,” he said.

“There’s more scrutiny. And that’s important – because in this country, there’s a limited scrutiny of foreign policy.” – Guardian