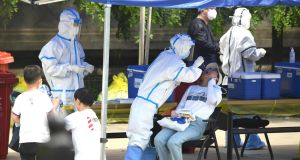 A health worker wearing a protective suit takes a swab test on a woman in Beijing. Photograph: Noel Celis/AFP via Getty Images

It took just eight days for New Zealand to lose its Covid-free status when two women who had been given permission to leave quarantine early after arriving from abroad tested positive for the coronavirus, authorities said on Tuesday.

New Zealand prime minister Jacinda Ardern, who has enjoyed enormous popularity for her success at ridding the country of coronavirus infection, said the government would review what happened, but that it was clear checks were not adequate in this case.

“Vigorous testing is now taking place across those who were in the quarantine facility at the same time, and those who may have had any, even the remotest chance of contact (with the women),” Ardern said in a Facebook Live post.

New Zealand had trumpeted its achievement last week of becoming one of the first countries in the world to eliminate Covid-19 and return to pre-pandemic normality, lifting all social and economic restrictions except border controls.

The country requires all people arriving from abroad to quarantine for 14 days to avoid reintroducing the disease. The two women aged in their 30s and 40s had travelled from Britain to visit a dying parent in Wellington on June 7th, the director general of health said in a news conference.

Both had gone into quarantine in Auckland after landing, but had been given special permission to leave on compassionate grounds, even though one had symptoms which she attributed to a pre-existing condition. They tested positive after they returned to quarantine.

The new cases ended a 24-day streak of no new infections in the country.

The country’s health minister David Clark said he was suspending all exemptions to the quarantine rules until he had confidence in the system.

“Compassionate exemptions should be rare and rigorous and it appears that this case did not include the checks that we expected to be happening. That’s not acceptable.”

One family member of the women has been isolated in Wellington. Staff at the hotel they women lived in would be tested. Co-passengers on their flight, staff at Auckland airport and anyone else whom the women met would be contacted.

The cases take the total number recorded in the country to 1,506. Deaths from the disease remain at 22, among the lowest in the developed world.

Meanwhile, Beijing has banned high-risk people from leaving the Chinese capital and halted some transportation services to stop the spread of a fresh coronavirus outbreak to other cities and provinces.

China’s financial hub of Shanghai demanded some travellers from Beijing be quarantined for two weeks, as 27 new Covid-19 cases took the capital’s current outbreak to 106 since Thursday.

That makes it the most serious flare-up in China since February, stoking fears of a second wave of the respiratory disease which emerged in the central city of Wuhan late last year and has now infected more than 8 million people worldwide.

“Beijing will take the most resolute, decisive, and strict measures to contain the outbreak,” Xu Hejian, spokesman at the Beijing city government, said at a press conference on Tuesday.

The outbreak has been traced to the sprawling Xinfadi wholesale food centre in the southwest of Beijing where thousands of tonnes of vegetables, fruits and meat change hands each day.

All high-risk groups in Beijing, such as people who are close contacts of confirmed cases, are not allowed to leave the city, state media reported on Tuesday, citing municipal officials.

All outbound taxi and car-hailing services have also been suspended. Some long-distance bus routes between Beijing and nearby Hebei and Shandong provinces were suspended.

Concerned about contagion risks, many provinces have imposed quarantine requirements on visitors from Beijing.

One suspected case who flew from Beijing to southwestern Sichuan province has become a confirmed case, health authorities said on Tuesday, and local officials are rounding up 111 close contacts for observation.

Hebei province reported four new cases, with two having come into direct contact with a virus carrier in the Chinese capital, and one being an operator at the Xinfadi market.

On Tuesday, Shanghai started to require travellers from medium-to-high risk Covid-19 areas in China to be quarantined for 14 days.

The stakes are high for Shanghai, which has been invited to host two Formula One races this season. US airlines are also poised to resumes flights to the city.

While not in a Wuhan-style lockdown, the Chinese capital has gone into a “wartime” mode on a district level, with local neighbourhoods instituting 24-hour security checkpoints, closing schools and banning wedding banquets.

Overnight, some parts of Beijing including the city’s old-style hutong neighbourhoods were fenced up, with some imposing single entry points.

However, in Huaxiang, the only neighbourhood currently designated as high-risk, some residents demanded officials impose more stringent contact tracing protocols.

Officials were relying on people to identify themselves as having visited the Xinfadi centre 9 kilometres away, residents said.

Yang Zhanqiu, deputy director of the pathogen biology department at Wuhan University, told state media he believed the new Beijing outbreak to be of a more contagious strain than the one that hit Wuhan at the beginning of the pandemic. The World Health Organisation’s emergencies director, Mike Ryan, said he expected Chinese authorities to publish the genetic sequencing of the virus in Beijing and supported their efforts so far. “A cluster like this is a concern and it needs to be investigated and controlled - and that is exactly what the Chinese authorities are doing,” he said. On Monday, researchers said they were still investigating the origins of the new outbreak, with some suggesting it had come from overseas.

State-run newspapers reported that the virus was discovered on chopping boards used for imported salmon at Beijing’s Xinfadi market amid worries about a second wave of the pandemic in China.

Mr Ryan said in a briefing that he would be “reticent” to say that packaging needs to be tested as a result of the new infections. His comments echoed those of experts earlier on Monday who said the fish itself was unlikely to carry the disease and any link to salmon may have been the result of cross-contamination. –Agencies