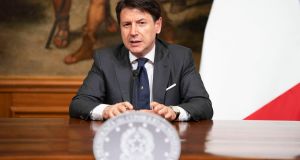 Italian prime minister Giuseppe Conte attends a press conference at the end of the cabinet meeting at Chigi Palace in Rome on Thursday. Photograph: Fillip Attili/EPA

Italian prime minister Giuseppe Conte is being questioned by prosecutors investigating the lack of a coronavirus lockdown of two towns in Lombardy’s Bergamo province that turned into some of the hardest-hit areas of the country’s outbreak.

Doctors and virologists have said the two-week delay in quarantining Alzano and Nembro allowed the virus to spread in Bergamo, which saw a 571 per cent increase in excess deaths in March compared with the average of the previous five years.

Lead prosecutor Maria Cristina Rota arrived with a team of aides at the premier’s office in Rome, Palazzo Chigi.

She is also expected to question the health and interior ministers. In previous days, she has interviewed the head of the Superior Institute of Health.

No one has yet been placed under investigation and it is unclear what, if any, criminal blame will be assigned to public officials for decisions taken or not in the onetime epicentre of Europe’s outbreak.

Among other things, the probe is looking into whether it fell to the national government in Rome, or the Lombardy regional authorities, to create a so-called “red zone” around the two towns.

After interviewing Lombardy regional officials last month, Ms Rota said it appeared it was the national government’s responsibility, but Mr Conte’s office has pointed to norms that delegate such authority to regions, and noted that other regions instituted “red zones” on their own.

Italy registered its first domestic positive case on February 21st in the Lombardy province of Lodi. Ten towns in the province, as well as a handful of towns outside Lombardy, were immediately locked down by the national government to try to contain the spread.

Alzano and Nembro registered their first positive cases two days later, but the government did not quarantine them for two weeks until all of Lombardy was locked down March 7th.

Asked if, in hindsight, he should have locked down sooner, Mr Conte told the La Stampa daily that he was at peace with the decisions taken, adding: “I acted based on science and conscience.”

The #BergamoIsRunning campaign insisted the outbreak was no worse than elsewhere, that the “misleading sensation” of its high number of infections was due to aggressive testing, and that production in steel mills and other industries was unaffected.

Bergamo mayor Giorgio Gori initially supported the campaign but now says he regrets not having locked down sooner. But he said at the time, no one knew the extent of contagion or that the virus had been circulating widely in Bergamo as early as January.

He noted that Italy’s health ministry issued a circular on January 22nd instructing local health authorities to flag any cases of anomalous pneumonia as possible coronavirus cases that should be tested. On January 27th, the health ministry amended that instruction to only test pneumonia patients who had visited China or been in direct contact with someone who had.

The narrowing of criteria “restricted the field of observation and impeded Italy, Lombardy and Bergamo from recognising that the epidemic was already here many weeks before it was officially recognised”, he said.

In a separate investigation, at least 50 families who lost loved ones to the virus have provided Bergamo prosecutors with formal legal complaints to seek clarity if there was wrongdoing in any of the cases.

Stefano Fusco, who helped organise a Facebook group at the peak of the epidemic that collected stories of loss, said they are not aimed at prosecuting individual health care workers but revealing where the system might have failed.–AP