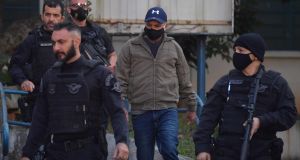 The administration of Brazilian president Jair Bolsonaro has been left reeling after a week in which the judicial siege around it tightened significantly, deepening the sense of crisis in the capital, Brasília.

Mr Bolsonaro appeared dejected in two listless appearances following the arrest on Thursday of an old army friend who is at the centre of a criminal investigation into a corruption scheme allegedly run by the president’s son Flávio when he was a state deputy in Rio de Janeiro.

Months after he disappeared from view, Fabrício Queiroz was detained in a house in the interior of São Paulo owned by Frederick Wassef, a lawyer for the Bolsonaro family. He is being held as part of the investigation into claims Flávio laundered money taken from the salaries of officials he employed when a state deputy in Rio.

For months the question “Where is Queiroz?” had been a frequent refrain among opponents of the president. The president, Flávio Bolsonaro and Mr Wassef had all denied any knowledge of his whereabouts. But according to the housekeeper, Mr Queiroz had been living at the house owned by the Bolsonaros’ lawyer for about a year.

Flávio, now a federal senator, denies any wrongdoing but has sought at least nine times to have the investigation into him halted. Mr Queiroz, a friend of the president for more than 30 years, worked in Flávio’s office until he was let go just before the investigation went public in 2018.

Mr Queiroz is also accused of links with Magalhães da Nóbrega, who was the alleged head of the city’s Office of Crime criminal organisation.

The group, a militia mainly composed of serving and former police officers, is prime suspect in the 2018 murder of councilwoman Marielle Franco and her driver.

Magalhães da Nóbrega’s wife and mother were also employed in Flávio’s office in the assembly. Magalhães da Nóbrega was shot dead by police in February while on the run, leading to accusations he was summarily executed to prevent him talking. After his arrest, Mr Queiroz hired the same lawyer who had represented the dead militia leader.

In further blows to the administration, this week also saw the supreme court vote by an overwhelming majority to continue the investigation into the abuse of fake news, which in recent weeks has come to focus on political and business allies of the president.

The president was also forced to fire his education minister, Abraham Weintraub, after his position became untenable following the release of a video of an April cabinet meeting in which Mr Weintraub called for the arrest of the “scumbags” on the supreme court.

He is the 10th of Mr Bolsonaro’s ministers to lose his job in just 18 months.