Coronavirus: Traffic jams and a run on cigarettes as many EU borders open 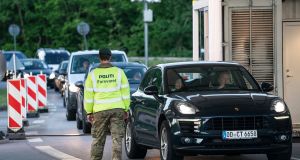 Vehicles queue at the border crossing in Krusaa, Denmark, after the country reopened its borders to Germany on Monday. Photograph: Claus Fisker/Ritzau Scanpix via AP

With huge traffic jams and a run on cheap cigarettes, border-free Europe was back in business on Monday, just in time for the summer holidays.

Three months of pandemic closures across the continent, setting aside the so-called Schengen rules to contain the Covid-19 pandemic, ended at midnight. But many border reopenings are as haphazard as the closures, with each EU country building its own metaphorical sandcastle.

With more borders than any other European country, Germany reopened its doors and lifted its non-essential travel warning to 27 European countries including popular holiday destinations Italy, Austria, Greece, France and Croatia. The country’s travel restrictions for visitors from outside the EU remains in place until at least July 1st.

Berlin is also strongly advising Germans to avoid Britain and Northern Ireland, saying that divergent test and collating methods makes it likely there is a “considerable” number of undetected Covid-19 cases there.

While Germany remains closed to Spaniards for now, Madrid has moved forward its reopening by 10 days to June 21st. Already on Monday it allowed about 10,000 Germans to fly to Mallorca and the other Balearic Islands for a trial run – waiving its 14-day quarantine for the groups.

“This pilot programme will help us learn a lot for what lies ahead in the coming months,” said Spanish prime minister Pedro Sánchez. “We want our country, which is already known as a world-class tourist destination, to be recognised as also a secure destination.”

The Polish-German border was reopened to all on midnight on Saturday morning between Frankfurt (Oder) and Slubice to the sound of cheers and Champagne corks popping.

At midnight on Monday five of Germany’s 13 border crossing to Denmark were opened, and were promptly clogged with traffic. A Danish holiday home company manager said the first German guests collected their keys at 2.15am, with 80 more collected in the subsequent two hours.

Traffic queues formed early on Monday further west on the French-Belgian border, too, where tobacconists in the Belgian border village of Macquenoise were swamped with French smokers looking for bargains after prices rose at home.

Further south, Austria, an important European north-south transit country, threw open its borders and lifted a quarantine requirement for incoming travellers from within the EU – excluding the United Kingdom, Sweden, Spain and Portugal.

The Alpine republic has also loosened its mask rules, with face coverings no longer obligatory in shops and other public places, though they remain a requirement on public transport and in pharmacies and healthcare facilities.

Greece, another popular holiday destination, is open again but visitors from France, Belgium and Italy will be tested on arrival while others face random tests.

Sweden, which took a more liberal lockdown approach, remains an outlier in Europe – with its citizens not yet welcome in much of Europe.

On three days over the weekend the Nordic country reported 2,850 new Covid-19 cases, two weeks after it loosened travel restrictions to allow citizens travel anywhere in the country.