Over 200 demonstrations have been held in France, as part of a national day of action, organized by the convocation of a dozen nurses' unions. In Paris, left-wing militants joined in, firing projectiles at the police, burning and destroying vehicles. 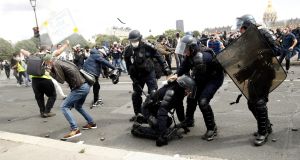 About 8.1 million people have now been reported to have been infected by the novel coronavirus globally, and 437,340 have died, the latest Reuters tally has shown.

The UK’s death toll from the Covid-19 pandemic has hit 53,077, according to a Reuters tally of official data sources that underline the country’s status as one of the worst hit in the world. The Reuters tally comprises fatalities where Covid-19 was mentioned on death certificates in England, Wales and Northern Ireland up to June 5th, and up to June 7th in Scotland. It also includes more recent hospital deaths.

Scientists at Imperial College London will start the first clinical trials of a potential vaccine for Covid-19 this week with more than £45 million (about €50 million) in backing from the British government and philanthropic donors.

Hungary’s parliament on Tuesday revoked special powers granted to prime minister Viktor Orban’s government to tackle the coronavirus pandemic as the number of cases there dwindles. Mr Orban had faced accusations from human rights groups of making a power-grab after politicians granted him the open-ended mandate in late March.

Hungary, which has a population of about 10 million, had recorded 4,077 cases of Covid-19 as of Tuesday, including 565 deaths. While revoking the government’s special rights, parliament also passed a resolution to maintain some recent measures introduced by Mr Orban, including a moratorium on all loan repayments until the end of this year.

Meanwhile, Paris police blamed violent fringe groups for hijacking a peaceful protest by health workers in central Paris on Tuesday, where at least one car was overturned and projectiles were hurled at police lines. The unrest broke out as thousands of doctors, paramedics and nursing home carers, many dressed in their scrubs, protested near France’s health ministry for better wages and working conditions. Healthcare workers say the coronavirus crisis has laid bare strains that threaten to break public healthcare in France.

Germany has appealed to the public to download its new smartphone app to help break the chain of coronavirus infections, one of several such apps that European governments hope will revive travel and tourism safely. EU countries have agreed technical standards for interoperability between smartphone apps that track the risk of infections.

Spain is considering imposing a quarantine on British travellers arriving in the country when it reopens its borders next week in response to a similar policy by Britain.

Residents of Moscow were able to return to museums and summer terraces for the first time in more than two months as the Russian capital rolled back curbs despite continuing to record more than 1,000 new coronavirus infections a day.

The wife of Ukraine’s president Volodymyr Zelenskiy was hospitalised after contracting coronavirus but her condition was stable, the Ukrainian presidential office said, adding that a fresh test of her husband was negative.

The US Centres for Disease Control and Prevention on Tuesday reported that there were now 2,104,346 confirmed cases of coronavirus in the US, an increase of 18,577 cases from its previous count, and said that the number of deaths from Covid-19 had risen by 496 to 116,140.

New York on Tuesday again reported its lowest number of hospitalisations and deaths since the start of the Covid-19 outbreak there, New York governor Andrew Cuomo told reporters in Albany.

Chile’s government has extended a state of catastrophe in place since mid-March by 90 days. Chile’s health officials also said that a rash of accounting glitches had led to the omission of more than 31,000 confirmed coronavirus cases from its total tally, or nearly one-sixth of the country’s total so far.

Beijing’s city government on Tuesday raised its Covid-19 emergency response level to II from III, according to state media, amid a fresh outbreak in the city that had risen to 106 infections by Tuesday.

In response to the new cluster, Beijing banned high-risk people from leaving the Chinese capital and halted some transport services to stop the spread of the outbreak to other cities and provinces. Kindergartens, primary schools and high schools will also shut from Wednesday.

Delhi’s local health minister checked into hospital and was being tested for coronavirus as India reported more than 10,500 new infections.

New Zealand said on Tuesday it had two new cases, both related to recent travel from Britain, ending a 24-day spell of no new infections in the country.

Hong Kong will let groups of up to 50 people meet from Friday, easing an earlier limit of eight people.

Turkey may have to adopt a harder line on social interactions following a worrying jump in coronavirus cases but it has no plans to reverse an easing of its lockdown, Turkish officials have said.

A Catholic archbishop in Cameroon says he has developed two plant-based remedies for Covid-19 which are given free to those who test positive for the disease.

Abu Dhabi extended a ban on movement in and out of the emirate and between its major cities by a week to further curb infections. – Reuters