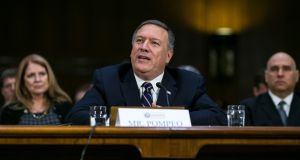 The first battle that Mike Pompeo prepared to fight was against the Russians, when he commanded a US tank platoon in Germany in the twilight of the cold war. On Thursday, he made clear he was ready to take on America’s old adversary if confirmed as director of the CIA.

But doing so may result in a battle closer to home: Pompeo and the CIA versus president-elect Donald Trump, whose denigration of the nation’s intelligence agencies has opened an extraordinary breach between an incoming president and the spies who will serve him.

The question hanging over Republican politician Pompeo, and 17 US intelligence agencies, is how to handle a president who embraces Russia’s president Vladimir Putin while the agency tries to keep Russia in check. So far, nothing in the CIA’s 69-year history has prepared it to deal with a president who is as openly derisive of its work as is Trump.

The dispute has stoked fears at the CIA that Trump, once in office, could halt or seek to limit inquiries into Russian hacking and other issues that he has dismissed as politically motivated smears, current and former agency officials said.

Of all the arms of the government, the CIA is particularly sensitive to slights from the president. It considers itself the eyes and ears of the president around the world, and it prides itself on being above politics (although that is an ideal that is at times more aspirational than many at the agency readily acknowledge). Since the September 11th, 2001, attacks, it has also expanded far beyond its core mission of espionage with a campaign of drone strikes and paramilitary operations against militants in the Middle East and Central Asia.

“It sends a message to our adversaries, to our enemies, that somehow they might be able to take advantage of us because we are so in conflict in terms of the president and the intelligence community,” Panetta said during a radio interview that aired on Thursday. He said the rift could tarnish the credibility of intelligence analysis and hurt morale at CIA headquarters.

Pompeo may have somewhat assuaged those concerns Thursday when he was asked at his Senate confirmation hearing if the CIA, under his leadership, would continue to pursue intelligence on Russian hacking – allegations that have come amid a swirl of unsubstantiated rumours about links between the Trump campaign and the Russian government.

“I will continue to pursue foreign intelligence with vigour no matter where the facts lead,” Pompeo said. He added that he would do this “with regard to this issue and each and every issue”. The CIA under his leadership, he said, would provide “accurate, timely, robust and clear-eyed analysis of Russian activities”.

To date, US spy agencies have publicly provided no evidence for their conclusions about Russia’s role in the hacking efforts, but their assessment has provided ample ammunition for Trump to attack the intelligence community he will soon command.

During a news conference on Wednesday, Trump went so far as to suggest that the intelligence agencies had leaked the allegations about his ties to Russia, which were contained in a classified report they gave him last week. Trump said the tactics recalled those of Nazi Germany.

The comments led to a phone call between Trump and James Clapper, the director of national intelligence, who released a statement late Wednesday night saying that intelligence agencies had “not made any judgment that the information in the document is reliable”. Clapper said the information had been provided to Trump and others to give policymakers “the fullest possible picture of any matters that might affect national security”.

Trump followed up with a post on Twitter on Thursday morning that appeared to distort the facts of the phone call between the two men, saying Clapper had called to “denounce the false and fictitious report that was illegally circulated”.

The latest tit-for-tat between Trump and the intelligence agencies dampened hopes in Washington that tensions would ease as inauguration day approached and the president-elect realised he would soon have the agencies, and all their capabilities, at his disposal.

Will Hurd, a former CIA clandestine officer and now a Republican representative from Texas, said that Grizzly Steppe, the US code name given to Russia’s efforts to disrupt the 2016 election, had worked. “Russian intelligence will consider ‘Grizzly Steppe’ to be their most successful covert action operation because it created a wedge, whether real or perceived, between the US president, intelligence community and the American public,” he said.

Others were less certain that Trump’s recent comments on Twitter would have a significant impact. “The CIA is not going to stop providing intelligence to the president of the United States because he said some negative things,” said Michael Hurley, a former CIA operations officer. But, he said, “people function better when they know their work is valued”.

The challenge for Pompeo may be getting Trump simply to pay attention to whatever the CIA finds out. The president-elect has yet to sit down regularly for the daily briefings that the intelligence agencies prepare, and he has repeatedly brushed off the need to do so once in office.

Pompeo, though, is close to vice president-elect Mike Pence, who does sit for a daily intelligence briefing. The hope at the agency is that working through Pence will give Pompeo the kind of direct line to the Oval Office that the CIA has come to expect – and will keep intelligence from being filtered through Mike Flynn, Trump’s choice for national security adviser, a retired intelligence officer who has been a harsh critic of the CIA as overly political.

On Thursday Pompeo said he did not believe that politics regularly seeped into the work done at the CIA, though he did say that politicians have at times sought to twist intelligence for their own purposes. Though known for his unrelenting partisanship in Congress – Pompeo has maintained that Hillary Clinton was involved in a cover-up following the 2012 attacks on the US consulate in Benghazi, Libya – both Democrats and Republicans have said they believe Pompeo is capable of rising above the political fray to the lead the CIA.

On Thursday, he sought to avoid politics as much as possible even when pressed on issues on which he has previously expressed strong positions. Asked about the Iran nuclear deal, which he has sharply criticised, Pompeo said, “if confirmed, my role will change” and that he would be evaluating Tehran’s compliance, not determining what should happen to the agreement.

But, he added, “the Iranians are professionals at cheating”. His responses were similarly by-the-book when it came to coercive interrogation methods, which he once deemed not only legal, but patriotic. At the hearing, though, Pompeo said he would “always comply with the law”. The law does not allow coercive methods, such as waterboarding.

And what if he was ordered to employ such methods by Trump, who said during the campaign that he would bring back waterboarding? “Absolutely not,” Pompeo said.