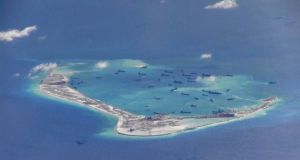 Chinese dredging vessels are purportedly seen in the waters around Mischief Reef in the disputed Spratly Islands in the South China Sea. Photograph: US Navy/Handout via Reuters

Any attempts by the United States to block access to artificial islands in the South China Sea would have to be backed up by waging war, Chinese state media have warned.

US president-elect Donald Trump’s nominee as secretary of state, Rex Tillerson, suggested the strategy during his confirmation hearing, saying that China would “not be allowed” to access the territories in the South China Sea.

The initial response was relatively calm, but the tone of the editorials in the state-owned media was much tougher.

“China has enough determination and strength to make sure that his rabble rousing will not succeed,” the Global Times newspaper, which generally takes a stridently nationalist tone, said in an editorial.

“Unless Washington plans to wage a large-scale war in the South China Sea, any other approaches to prevent Chinese access to the islands will be foolish,” it said.

The Global Times is state-owned and published by the same house that publishes the Communist Party’s official organ, People’s Daily.

While it does not reflect official government policy, it often gives a good indication of the way the central government is thinking.

China has built a number of artificial islands on reefs, equipped with airstrips for military aircraft and anti-aircraft missile batteries to back up its claims to most of the South China Sea.

China’s claims are contested by Brunei, Malaysia, the Philippines, Vietnam and self-ruled Taiwan.

The maritime region has major strategic importance, with €4.75 trillion in trade passing through every year, and it is also believed to be resource rich.

An international tribunal in The Hague has rejected Beijing’s claims as baseless after an application from the Philippines.

The editorial went on to say that the US has “no absolute power” to dominate the South China Sea.

“Tillerson had better bone up on nuclear power strategies if he wants to force a big nuclear power to withdraw from its own territories,” it said.

“We’re going to have to send China a clear signal that first the island-building stops and second your access to those islands is also not going to be allowed.”

The Global Times described Mr Tillerson as the most controversial of Mr Trump’s nominees and the one “most likely to be vetoed by the Senate” because of his “intimate relations” with Russian President Vladimir Putin.

“It is suspected that he merely wanted to curry favour from senators and increase his chances of being confirmed by intentionally showing a tough stance toward China,” it said.

The China Daily said in a commentary that Mr Tillerson’s remarks were “not worth taking seriously because they are a mish-mash of naivety, shortsightedness, worn-out prejudices, and unrealistic political fantasies. Should he act on them in the real world, it would be disastrous.”

“As many have observed, it would set a course for devastating confrontation between China and the US. After all, how can the US deny China access to its own territories without inviting the latter’s legitimate, defensive responses?” it said.