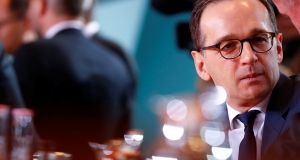 Mr Maas has ordered an inquiry into decentralised surveillance of Anis Amri, the 24-year-old Tunisian man who hijacked a truck and drove it into the Breitscheidplatz market, killing 12 people and injuring almost 50 others.

“After everything that has happened, after everything we know in the meantime, no one can sit down here and say no mistakes were made,” Mr Maas said on German TV.

Almost a month after the attacks, the senior Social Democrat has ordered an inquiry of all bodies involved and vowed to publish the report, to show “very precisely who did – and decided – what, and when”.

The market attack has sparked a massive security debate in Germany, and a competence tug-of-war between federal authorities in Berlin and state leaders.

Mr Maas and federal interior minister Thomas de Maizière have blamed the attack on a lack of co-ordination and communication between dozens of police and investigation bodies in Germany’s 16 federal states.

Existing decentralised structures, Berlin politicians argue, failed to control the failed asylum seeker with links to the Islamic State terror group because he was highly mobile within Germany and used some 14 aliases with various state bodies.

With an eye on the looming election season, German politicians have been outdoing each other since the attack with new security proposals.

Chancellor Angela Merkel’s government has already agreed to expand the use of electronic leg-bands and expedited deportations for failed asylum seekers deemed a threat to national security.

“Whoever conceals their identity, is criminal or involved in the extremist scene have to be taken out of the asylum system, end of discussion,” said Thomas Strobl, a member of the Bundestag. “Until they leave these people must be held in custody.”

Meanwhile, Cologne police face renewed criticism over their handling of New Year’s Eve security, a year after hundreds of women were groped and sexually assaulted by groups of men – including North African men and some asylum seekers.

To prevent a repeat of that a year later, police detained about 2,500 dark-skinned men from trains to Cologne, saying, in the words of a spokesman, “everyone knows what North Africans look like”.

Two weeks after their intervention, dismissing criticism that their detentions constituted racial profiling, police say just 30 of 657 people stopped were from Algeria or Morocco. All the others were from Iraq, Afghanistan or Syria.