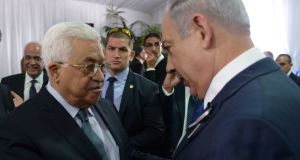 The French foreign minister Jean-Marc Ayrault will host representatives of more than 70 countries and international organisations at the Paris Conference for Peace in the Middle East on Sunday.

While the meeting is expected to have no concrete results, it aims to convey a powerful signal of international agreement on the necessity of a two-state solution to the Israeli-Palestinian conflict, five days before the inauguration of Donald Trump as US president.

“The purpose is not to isolate Trump or Israel, ” said a high-ranking French diplomat. “It’s like a photograph recording that a large number of countries take the position that a two-state solution remains possible.”

The context is not propitious. Trump’s election, the adoption on December 23rd by the UN Security Council of resolution 2334 condemning Israel’s continuing confiscation of land in East Jerusalem and the West Bank as a “flagrant violation under international law”, and unprecedently harsh US criticism of Israel by the outgoing secretary of state John Kerry five days later, have hardened positions on both sides.

Jason Greenblatt, the property lawyer Trump has appointed as his “special representative for international negotiations”, has said he does not believe a two-state solution is viable.

David Friedman, the bankruptcy lawyer Trump intends to appoint as ambassador to Israel, is allied with the Israeli far right, opposes the creation of a Palestinian state, supports the building of illegal settlements and has expressed an intention to move the US embassy from Tel Aviv to Jerusalem.

Israel’s prime minister, Binyamin Netanyahu, has refused to attend the conference, or a subsequent dinner to which French president Francois Hollande invited him and the Palestinian president Mahmoud Abbas.

“It’s a rigged conference, rigged by the Palestinians with French auspices to adopt additional anti-Israel stances,” Netanyahu said on Thursday. “This pushes peace backward. It’s not going to obligate us. It’s a relic of the past. It’s a last gasp of the past before the future sets in.”

Israel’s defence minister, Avigdor Lieberman, has called the peace conference “the modern edition of the Dreyfus affair”, a reference to the 1894 trial of a Jewish army captain on trumped-up charges of treason.

Mr Abbas said that if the US moved its embassy to Jerusalem, which Palestinians also claim as their capital, “not only would it deprive the US of any legitimate role in resolving the conflict, but it would destroy the two-state solution”. He told the daily Le Figaro that the embassy move could prompt Palestinians to reverse their recognition of the state of Israel.

Mr Abbas will see Pope Francis and inaugurate the new Palestinian embassy to the Vatican on Saturday, before travelling to Paris. Though he will not attend the conference, he will see French leaders.

Participation in the conference has more than doubled since the initial session on June 3rd last year. Among those attending on Sunday are John Kerry, new UN secretary general António Guterres, the EU’s diplomatic representative Federica Mogherini and representatives of the Arab League and Organisation of the Islamic Conference.

Heart of the matter

Peace activists, including former high-ranking Israeli and French diplomats, would prefer that the conference address the difficult issues of Palestinian statehood, borders and the status of Jerusalem, all of which were raised by Kerry in his December 28th speech.

“There is no sense in bringing 70 foreign ministers to Paris and then not going to the heart of the matter – two states for two peoples,” Alon Liel, a former director general of the Israeli foreign ministry, who is campaigning for wide recognition of Palestine, wrote in the news magazine the Jerusalem Report.

But the French fear that overambition could defeat the goal of a broadly-based consensus.

The previous French foreign minister, Laurent Fabius, linked the original French initiative to recognition of Palestine, saying France would unilaterally do so if a peace agreement was not reached.

Of the 137 governments that have recognised Palestine, only three – the Czech Republic, Malta and Sweden – are EU members.

When Mr Ayrault came to office a year ago, he dropped the linkage. “We realised that it was complicating our work, and that we had to dissociate the two,” he said. “A certain number of our partners were uncomfortable with the undertaking and might not have followed us.”

There are nonetheless ever more pressing calls to recognise Palestine. Twelve retired French ambassadors wrote in Le Monde that “It would be to the honour of France to recognise the Palestinian state . . . Let us repair a historic injustice.”

The French believe that although hopes for a Palestinian state are doomed for the duration of the Trump administration, history is long and the necessity of a two-state solution will eventually prevail.