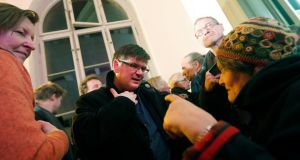 Berlin state secretary for housing, Andrej Holm. His appointment has sparked a debate because he signed up for the Stasi shortly before the Berlin Wall came down. Photograph: Felipe Trueba/EPA

Andrej Holm has a haunted look when he slips out of his new office just after 7pm. By rights the 46-year-old should be walking on air since making the leap from academia to Berlin’s new city-state government last month. And he would be – if it wasn’t for his past, and how he dealt with it.

It was 1989, East Germany had just months to live, and Holm, then 18, was living with his regime-friendly parents. His father, born to German communists in Moscow, worked for the Stasi, East Germany’s secret police.

The young Holm signed up for the same career path. He joined the ruling Socialist Unity Party (SED) in January 1989 and joined the Stasi, completing basic training in his father’s department.

It intercepted communications, evaluated them and passed them on for use – often against East German opposition figures.

After writing, by hand, an oath of allegiance to the Stasi, Holm was allowed study journalism in Leipzig.

We will never know what would have happened next because, in November 1989, the Berlin Wall collapsed, and in January 1990, the Stasi – the so-called “sword and shield” of the SED – was abolished.

As civil rights groups stormed the Stasi headquarters in Berlin, exposing the shocking scale of spying on ordinary citizens, Holm had switched studies to sociology at Berlin’s Humboldt University.

He made a career there, studying urban development and engaging politically with left-wing groups opposed to the market-driven redevelopment of the unified German capital.

He faced repeated accusations of involvement with radical left-wing groups, leading to several court cases but never a conviction.

As property prices spiked in Berlin in recent years, driving lower income residents from the city centre, Holm – now a full-time “urban sociologist” at Humboldt University – rose to prominence as a critical voice in the capital’s gentrification debate.

His reputation and expertise were among the reasons why the Left Party (Linke) approached him to join the new Berlin city-state government as a state secretary in the ministry for urban development and housing in December.

Days after his appointment, however, Holm’s past came back to haunt him. In particular a questionnaire he had filled in when hired by the Humboldt University in 2005.

Like all public servants in Germany, he was obliged to answer questions such as: Did you ever work for the Stasi? Did you receive payment? Did you sign a formal letter of obligation?

Holm answered “no”, something he admits now was an error.

“I reported [in 2005] what I remembered,” said Holm. He regrets now considering a career in the Stasi, even if the events of 1989 thwarted a longer career there.

With Holm facing resignation demands, the Left Party, successor to the SED, has accused his critics of trying to smear anyone with any Stasi links, no matter how brief.

But critics do not believe Holm’s explanation – that he was unaware of his oath of loyalty to the Stasi. Given his family background, his classic Stasi education path and a 200-page Stasi file, they accuse him of misleading the university in 2005.

His subsequent career – the basis of his political appointment – is thus tainted, they say.

“It is clear that there was a targeted preparation work going on to be a Stasi officer, with a cover as interior ministry official,” said Christian Booss, a member of the “January 15” East German civil rights group.

The Holm scandal has pulled into the present once more the ghosts of the East German past. One level of the debate is ideological.

Was the Stasi, as the Left Party insist, simply a domestic intelligence service like any other? Or was it, as critics claim, a particularly repressive organisation given it had one informer for every 65 East German citizens – making Stasi links a problem even now.

This ideological standoff is what colours the realpolitik of Berlin’s new state government.

It is the second time since German unification in 1990 that the Left Party has shared power with the Social Democrats (SPD) in the city-state government.

But the Left’s decision to stand by Holm has created a credibility risk for SPD mayor Michael Müller’s new coalition.

Müller says he “struggles to judge an 18-year-old”, but made it clear the case has caused him “much anguish” – particularly as Holm admitted details of his Stasi past only after they had become public.

This week Holm submitted a letter of explanation for his false questionnaire answers in 2005 to the Humboldt University, which granted him leave to take the government job.

Now it falls to Humboldt president Sabine Kunst to decide the fate of her employee – at the university and, by extension, as a player in the German capital’s still-divided political scene.