South Korean and US security officials talk about managing tensions 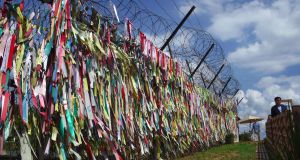 Ribbons with inscriptions calling for peace and reunification are displayed on a military fence at Imjingak peace park near the Demilitarized Zone (DMZ) dividing the two Koreas in the border city of Paju. Photograph: Jung Yeon-Je/AFP/Getty Images

The senior national security officials of the United States and South Korea spoke for about 40 minutes on Friday after North Korea announced plans to launch missiles near Guam.

North Korea boasted that it would have, “within days”, a plan to fire four Hwasong-12 ballistic missiles to within 30 to 40 kilometres of Guam, the main Pacific island base of US forces in the region.

US president Donald Trump has vowed to unleash “fire and fury” against North Korea if it further threatens the US.

Guam is an unincorporated territory of the US.

It is believed matters discussed included a US/South Korea joint military exercise and the stalled deployment in South Korea of a US anti-missile defence system known as Thaad — Terminal High Altitude Area Defense.

The military exercise is a routine and regular event about which North Korea has in previous years been informed to keep tensions low.

However, in the current climate, the exercise could provide a pretext for a further escalation of tensions.

The Thaad defence system has proved controversial in South Korea and is a bone of contention between president Moon and his predecessor, Park Geun-hye, impeached in 2016 and jailed this year on corruption charges.

Six of the mobile anti-missile rocket launchers have been deployed to date but in May (before the current crisis), Moon ordered a suspension of the deployment, pending a review.

Thaad, whose rockets travel at speeds greater than Mach 8, is designed to knock out missiles launched from North Korea before they have got anywhere near their target.

This week, president Moon announced what observers here see as a radical rebalancing of the South Korean defence forces in which hitherto, the army held sway.

Under a new dispensation, the country’s navy and air force will have more prominent roles based on an assessment of the changing threat from North Korea.

Since the end of the Korean War in July 1953 and the partition of the peninsula, the US military has played the lead role in its partnership with the South Korean military.

In any fresh outbreak of hostilities, the US would lead a Combined Forces Command that, assuming North Korea and any allies it might have were defeated, would then hand command to the South Korean defence forces who would ultimately hand power back to a civilian elected government.

The stakes for South Korea in the current crisis are incredibly high, notwithstanding the generally phlegmatic public reaction to events to date.

Seoul and the greater Seoul area abut directly onto the Demilitarised Zone (DMZ) separating north and south, which is approximately 30 kilometres from the South Korean capital.

Behind the border, the North Korean army is believed to have hundreds if not thousands of rockets and artillery pieces aimed at the southern capital.

Fifty two million people live in South Korea – about half of them in and around Seoul.

Some observers in South Korea credit the North Korean dictator Kim Jong-un with greater rationality and self-interested strategic thinking that he is given in the US and among some commentators.

“He may be selfish but he doesn’t want to die,” said an official with a UN agency in Seoul.

“His aim, from his grandfather and his father, is to protect the regime. He wants to play with the big boys; he wants direct talks with the US. That’s why he pushes us [SOUTH KOREA]aside.”

A diplomat from the European Union, who also spoke on condition of anonymity, said most measured opinion in South Korea was that war with North Korea is “a hypothetical event that is very unlikely to happen but is catastrophic if it does.”

“The Doomsday analysis,” he added, “tends to be that if it happened, it would happen by accident.”

Yesterday, former US secretary of state John Kerry, added his voice to those concerned at president Trump’s handling of events.

The terminology employed was “concerning because it pushed people into corners,” he said.

“It is important not to heighten tensions but to work through them. . . I think that we have a number of options open to us . . . and I hope people will work the diplomatic route. Wisdom is called for here.”