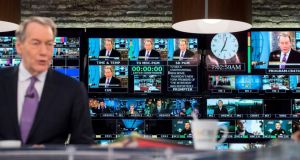 Charlie Rose was fired by CBS News on Tuesday, as his colleagues reacted with shock and horror to allegations of serial sexual harassment made against the veteran TV news show anchor – and made it clear they believe the women.

The president of CBS News, David Rhodes, said Rose’s behaviour was “extremely disturbing and intolerable”. “What may once have been accepted should not ever have been acceptable.”

Rose said on Monday: “I am greatly embarrassed. I have behaved insensitively at times, and I accept responsibility for that, though I do not believe that all of these allegations are accurate. I always felt that I was pursuing shared feelings, even though I now realise I was mistaken.”

Asked if he had anything to say to the women who had accused him of “wrongdoings”, he replied: “It’s not wrongdoings.”

Rose’s copresenters of CBS This Morning, Gayle King and Norah O’Donnell, broke away from their normal news-reporting style on Tuesday’s programme to give raw, personal opinions on the behaviour alleged against him. “This is a moment that demands a frank and honest assessment about where we stand and, more generally, the safety of women,” O’Donnell began.

The show had opened with a straight news report on a story that now involved their own station. A CBS This Morning reporter related the facts that Rose, who is 75, had been suspended from his job while the company looked into detailed accusations from eight women that he had made unwanted sexual advances towards them, as revealed by the Washington Post.

Allegations include lewd phone calls, walking around naked in their presence, or groping their breasts, buttocks or genital areas; the women were employees or aspired to work for Rose at the Charlie Rose show from the late 1990s to as recently as 2011, the Washington Post reported.

“It takes a lot of courage for these women to come forward,” said O’Donnell. King added: “We hope they will continue to speak up.” O’Donnell continued: “Let me be very clear. There is no excuse for this alleged behaviour. It’s systematic and pervasive. Women cannot achieve equality in the workplace or in society until there is a reckoning and a taking of responsibility . . . This has to end. This behaviour is wrong.” She added that she was very proud to work for CBS, among “incredible people”.

King said she had only had an hour and 42 minutes of sleep the previous night, after the explosive revelations. She said her children had called her and her best friend, the TV star and actor Oprah Winfrey, had called her. “She said, ‘Are you okay?’ I’m not okay,” said King, adding that she found reading the report about Rose “troubling, disturbing and painful”.

She said she had enjoyed a friendship and professional partnership with Rose for the past five years and had held him in high regard and was struggling with how to deal with the news. “That said, Charlie does not get a pass here. He does not get a pass from anyone in this room. We are all rocked by this,” King said.

She added that she applauded the women who had spoken out. “I can’t stop thinking about the anguish to these women, what happened to their dignity . . . their bodies . . . maybe their careers.”

Both women said they intended to speak to Rose later on Tuesday. – Guardian