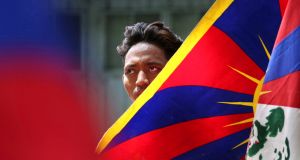 The Chinese government has backed its under-20s football team, which stormed off the pitch during a game against a German fourth-division club following a demonstration by pro-Tibet activists, saying it “resolutely opposes any move by separatists”.

The game against TSV Schott Mainz was delayed for 25 minutes after fans waved Tibetan independence flags.

“We are firmly opposed to any country or any individual offering support to separatist, anti-China and terrorist activities or activities defending Tibet independence, in any form or under any pretext,” foreign ministry spokesman Lu Kang told a regular press briefing.

“I must stress that mutual respect is what the official host should provide their guest, and that respect between any two countries should be mutual,” Mr Lu told the briefing.

China sees the overwhelmingly Buddhist Himalayan region as part of its sovereign territory and it has run the territory with a firm hand since People’s Liberation Army troops marched into Tibet in 1950.

The Chinese say they liberated the Tibetan serfs from theocracy until the god-king Dalai Lama fled into exile in India after a failed uprising in 1959. Beijing says it has brought economic wellbeing to the region, and accuses Dalai Lama of agitating for independence. However, many Tibetans protest against rule by Beijing and have called for the return of their spiritual leader, the Dalai Lama, who Beijing considers a dangerous separatist.

China’s under-20 team was named in the fourth-tier Regionalliga Sudwest this season after just 19 teams qualified for the league to help fill out the fixture list. The team’s inclusion was part of a five-year agreement between Germany and China aimed at improving Chinese youth football.

The move has proven controversial in Germany, and three of the league’s 19 teams have refused to take part. The other 16 teams are scheduled to face the Chinese youth side in friendlies during the second half of the season.

Ronny Zimmerman, vice-president of the German Football Association (DFB), said in a statement that the protesters were exercising their right to freedom of expression.

“We cannot ban the protests, there is the right to freedom of expression here and certain rules apply,” he said. “As a guest, you should be able to handle it calmly and stand above such actions.”

A commentator in China’s Global Times newspaper said freedom of speech did not cover separatism and called for “zero tolerance” for such moves.