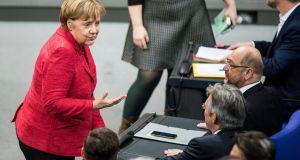 Germany’s Social Democratic Party (SPD) has seen a lot in more than 150 years – but nothing quite like the political crisis gripping Berlin since Sunday evening.

The first collapse of German coalition talks in the post-war era has raised concerns over chancellor Angela Merkel’s fourth term hopes that go far beyond the country’s borders . But the crisis has handed the SPD an intriguing dilemma.

Two months ago, after a decade of electoral disasters, the party outdid itself again with a 20.5 per cent share of the vote in Germany’s federal election – its worst-ever result coming on the back of a four-year spell in government as the junior partner to Merkel’s Christian Democratic Union (CDU).

The lessons drawn: first, grand coalitions with Angela Merkel are bad for the SPD’s health; second: self-analysis on the opposition benches was urgently needed. But those plans may come to nothing after the liberal Free Democrats (FDP) pulled the plug on a coalition with the CDU, its Bavarian CSU allies and the Greens.

As president he is obliged to act above party lines and, on Monday, he asked all Bundestag MPs to “reflect and reconsider their position”.

But shortly before Steinmeier signalled that fresh elections were not in the national interest, Schulz ruled out allowing his SPD prop up Angela Merkel as junior partner for the third time since 2005.

“We will not join a grand coalition,” said Schulz, before describing fresh elections as “the right path”.

The two men’s difference of opinion compounds a growing SPD dilemma: will voters reward the party for demanding fresh elections if a grand coalition is as likely after the poll as now?

For years a grand coalition was the SPD’s preferred option over the other choice: a centre-left alliance with the Greens and Left Party, heirs to East Germany’s ruling SED.

Historical traumas and realpolitik concerns meant such a coalition was impossible for the SPD, even when the numbers were there.

But now even that option is off the table. In the new, crowded, seven-party Bundestag, a so-called Red-Red-Green alliance (SPD-Left-Green) would be 85 seats short of a majority.

However you look at it, Sunday’s collapse of the so-called Jamaica option (CDU/CSU-Green-FDP) – so called because the colours of the Jamaican flag correspond to those of the parties concerned – has made Germany’s third grand coalition in 12 years more likely than ever.

Unless, that is, you look beyond Martin Schulz. After less than a year in office, September’s election disaster has dented his credibility.

The strong man in the SPD is now a woman: Andrea Nahles, head of the Bundestag parliamentary party. On Monday she appeared to rule out the SPD serving as a “stop gap” for another Angela Merkel grand coalition. By Tuesday morning, however, her tone had changed.

“No one” is interested in fresh elections, she said, but her party was equally cool on another grand coalition “lacking substance and strength”.

The alternative? “We should talk about shaping a process that leads the country to a stable government . . . a process that can end in a minority government,” she said on breakfast television.

So would the SPD be prepared, from the opposition benches, to tolerate a minority Merkel administration? “We have to talk about that,” she said, hours after Merkel said she was was “sceptical” of such an option.

But the acting chancellor is running out of options just as the SPD discovers theirs.

And so, in the Bundestag on Tuesday, senior SPD politicians read with interest text messages flagging as one option the Irish “confidence-and -supply” model.

Though never tested at federal level, similar arrangements have worked well in federal states, both east and west.

As Germany faces into uncharted political waters, Merkel’s chief of staff, Peter Altmaier, called for clarity in the coming three weeks about how to form a stable – not majority – government based on September’s election result.

Altmaier, chancellery chief and acting finance minister, insisted on Tuesday his party would “give the SPD a chance to think” about its responsibility.

“The task ahead is great but solvable,” he said. “It is a test but not a state crisis.”