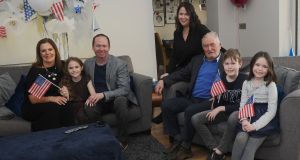 As Joe Biden took the presidential oath of office in Washington DC, the Stars and Stripes fluttered outside shops in his ancestral Co Mayo town while, nearby, his relatives, the Blewitt family of Knockmore, watched the ceremony live on TV.

“It’s such a shame we couldn’t go over,” said Joe Blewitt, a cousin removed by several generations and few thousand kilometres from now President Biden but feeling a strong familial closeness nonetheless.

“We got the invitation but, what with everything the way it is now, we just couldn’t. But once we get flying again, we’ll be over,” said Blewitt.

And so for the family – Joe, his Dad Brendan, wife Deirdre, and their children Dara, Emily and Lauren – they would have to accept for now a restrained celebration among themselves .

The rest is history . . . and a large mural in Market Square in Ballina. The artist, Padraig Smiler Mitchell, created it last September along with other local enthusiasts and sent a video of its unveiling over to President Biden, who visited Ballina in 2016.

“He said he’d be back to see it,” said Smiler, sucking on a roll-up and looking justifiably a little chuffed as photographers took shots of his and his work. “We had big plans,” he said of inauguration day. “We’d a big screen ready but. . .”

If Level 5 hadn’t left the town bereft of its usual bustle of people, the rain certainly didn’t help either. But the flags and the mural add more than a dash of colour on a dull winter’s day.

Smiler’s partner in the mural project (which includes a representation of the White House magically transported into the centre of Ballina, Mayo flags flying from its roof) was fellow publican Derek Leonard, proprietor of Harrison’s of Garden Street.

“It’s a great day for the world,” Leonard says of the inauguration, expressing what is almost certainly a feeling felt by nearly everyone in the town and many beyond.

The pair describe themselves as “two bored publicans” who whiled away some lockdown time on the mural project. They spied the empty gable on Mary H’s ladies’ clothes shop overlooking Market Square and thought “wouldn’t it be nice to honour one of our own”, as Smiler puts it.

The council has plans for the disused former military barracks opposite; a possible home for a President Joseph R Biden Centre, the pair speculate, and maybe a permanent home for the mural as well.

Everyone in Ballina hopes and assumes that President Biden will visit the town again. The current display of US flags from facades and in shop windows is testimony to their enthusiasm. And when he does come, Smiler hopes he’ll visit his pub in Ballycastle over near the Ceide Fields, “a wonderful, scenic part of the world,” he says.“I’ll bring him down there. Sure he’ll be close enough when he’s in Ballina.”

Outside Harrison’s, a small lady with a Stars and Stripes votefromabroad.com face mask, has the attention of a photographer. Late of Oakland, California, but Ballina resident for over 15 years, Beryl McCrainey-Slevin is above all relieved at the day’s events in Washington.

“Oh my gosh,” she exclaims, “I’m just so relieved our four year nightmare is ending. I expect America to work now on healing. People are desperately hurting now.”

And Biden? “I can’t wait for him to come back.”