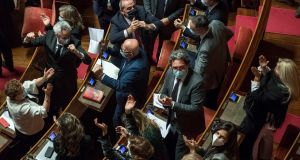 Italy’s prime minister has said he will attempt to reinforce his fragile coalition government after being left without a working majority as the country grapples with twin health and economic crises.

Giuseppe Conte narrowly survived a vote of confidence in Italy’s upper house on Tuesday evening that had been triggered by the exit of Matteo Renzi’s small Italia Viva party from his coalition in protest at the country’s response to the Covid-19 pandemic.

“Now the goal is to make this majority even more solid,” Mr Conte said on Twitter after winning the vote. “Italy doesn’t have a minute to lose. We must immediately get to work to overcome the health emergency and the economic crisis.”

While Mr Conte gained enough support to win the vote he failed to achieve an outright majority, and scraped through as a result of Mr Renzi’s decision to abstain, some defections from rivals, and the support of some life senators.

Mr Conte won 156 out of 296 votes in the senate on Tuesday, short of the 161 senators he would need for an absolute majority, but enough to pass because of 16 abstentions.

If he had lost the senate vote, he would have been forced to hand in his resignation to the president, Sergio Mattarella, plunging Italy into a full political crisis.

This leaves his government severely weakened at a time of national emergency as attention in Rome swings to how his weakened coalition will move forward in spending more than €200 billion in EU pandemic recovery money.

Italian media reported on Wednesday that Mr Conte had immediately got to work in trying to convince some senators who did not vote for him on Tuesday to pledge their support to him.

Without a majority in the upper house he will be unable to pass meaningful legislation, including annual budgets, without the backing of lawmakers outside of the government.

Italy has had several minority governments in the recent past, but the result leaves Mr Conte’s coalition highly vulnerable to collapse and needing to haggle over any meaningful votes.

“He risks being a lame-duck prime minister from now on,” said Francesco Galietti, founder of the risk consultancy Policy Sonar. “Conte will try to make it look like a victory, but the whole house of cards could easily collapse further down the line.”

Paolo Gentiloni, a former Italian prime minister and the current EU commissioner for economic and monetary affairs, said on Monday that Italy’s recovery plans needed “to be discussed and strengthened”, but he did not single out the country for criticism.

Mr Renzi has said Mr Conte has mismanaged plans to spend the EU money. “We have been asking for a turn round for months,” the former prime minister told the Senate before the vote on Tuesday. “It is not true that we have been irresponsible, we have been far too patient.”

Italy has suffered more than 82,000 deaths during the Covid-19 pandemic, the second-highest toll in Europe. This month, the government announced a further increase to its planned budget deficit for this year to allow for more spending to fight a brutal recession.

Ahead of the vote, Mr Conte had pledged to introduce greater proportional representation in elections, a move interpreted as an attempt to woo lawmakers from the smaller parties that would benefit.

Both Mr Conte and Mr Renzi exchanged strong words in speeches to the senate on Tuesday. Mr Conte accused the ex-prime minster of causing instability during “a challenge of epochal proportions” and defended his coalition government’s record fighting the pandemic.

“The whole political class risks losing contact with reality,” Mr Conte said. “Was there really a need to open a political crisis at this stage?”

Mr Renzi responded that, rather than bringing the country to the brink of a political crisis, the departure of Italia Viva from the coalition was meant to avert a further escalation of “a health and economic crisis”. – Copyright The Financial Times Limited 2021