‘We’re in a national emergency, and it’s time we treated it as one,’ says US president 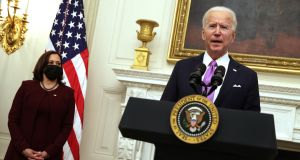 US President Joe Biden speaks as vice-president Kamala Harris looks on during an event in the White House on January 21st. Photograph: Alex Wong/Getty Images

Mr Biden, who was sworn-in as the 46th president of the United States on Wednesday, signed 10 executive orders relating to the Covid crisis yesterday, a day after unveiling a range of initiatives, including a commitment to rejoin the Paris climate accords.

Speaking in the White House on Thursday, Mr Biden delivered a stark message to Americans about the coronavirus pandemic, promising a “war time effort” to tackle the crisis.

“Things are going to continue to get worse before they get better,” he said, predicting that the death toll will top 500,000 next month.  “We didn’t get into this mess overnight and it’s going to take months to turn things around.”

Outlining his Covid strategy, including a plan to roll-out vaccines, he added: “We’re in a national emergency, and it’s time we treated it as one.”

“Over the past year we couldn’t rely on the federal government to act with the urgency and focus and co-ordination we needed, and we have seen the tragic cost of that failure.”

Mr Biden reiterated previously-announced measures requiring arriving passengers to the United States to show proof of a negative test and to abide by federal self-quarantine and self-isolation guidelines. While Mr Biden has pledged to deliver 100 million vaccines within his first 100 days of office, some experts have argued that this target is too low. The logistics of administering vaccines to a country of 300 million people, where states retain significant power over healthcare policy, will be a challenge.

Later, infectious disease expert Dr Anthony Fauci said he was confident that cases had plateaued. Asked of his feelings about working with the new president, Mr Fauci replied: “It’s somewhat of a liberating feeling.” Referring to Mr Trump’s past comments about hydroxychloroquine as a treatment for Covid, he said: “I take no pleasure at all of being in the position of contradicting the president.”

Mr Biden is expected to hold his first call with a foreign leader on Friday when he speaks to Canada’s Justin Trudeau.