Republicans oppose Cuba visit, which marks first by a US president in nearly 90 years 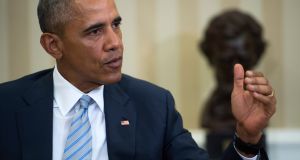 US president Barack Obama will visit Cuba in March, marking the first US presidential visit to the island since 1928. Photograph: Shawn Thew/EPA

Barack Obama will pay a historic visit to Cuba in March, becoming the first US president to step foot on the island in nearly nine decades.

The brief visit will mark a watershed moment for relations between the US and Cuba, a communist nation estranged from the US for half a century until Mr Obama and Cuban president Raul Castro moved to relaunch ties in 2014.

Since then, the nations have reopened embassies in Washington and Havana and moved to restore commercial air travel, with a presidential visit seen as a key next step toward bridging the divide.

Mr Obama’s stop in Cuba will part of a broader trip to Latin America that the president will take next month.

Though the president had long been expected to visit Cuba in his final year, word of his travel plans drew immediate resistance from opponents of warmer ties with Cuba — including Republican presidential candidates.

Next month, I'll travel to Cuba to advance our progress and efforts that can improve the lives of the Cuban people.

Texas senator Ted Cruz, whose father fled to the US from Cuba in the 1950s, said Mr Obama should not visit while the Castro family remains in power.

Florida senator Marco Rubio, another child of Cuban immigrants, criticised the president for visiting what he called an “anti-American communist dictatorship”.

He said: “Today, a year and two months after the opening of Cuba, the Cuban government remains as oppressive as ever.”

With less than a year left in office, Mr Obama has been eager to make rapid progress on restoring economic and diplomatic ties to cement the rapprochement with Cuba that his administration started.

Following secret negotiations between their governments, Mr Obama and Mr Castro announced in late 2014 they would begin normalising ties, and months later held the first face-to-face meeting between an American and Cuban president since 1958.

On Tuesday, the two nations signed a deal restoring commercial air traffic as early as later this year, eliminating a key barrier to unfettered travel that isolated Cuban-Americans from their families for generations.

Not since Calvin Coolidge went to Havana in January 1928 has a sitting US president been to Cuba’s capital.