US president Donald Trump says that he is "unlikely" to meet with special counsel Robert Mueller, who is investigating Russian interference into the 2016 US presidential election. Video: The White House 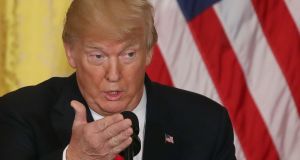 Donald Trump: “It just shows everyone how broken and unfair our court system is.” Photograph: Mark Wilson/Getty

US president Donald Trump has criticised a court order blocking his plan to phase out support for so-called ‘dreamers’ and described the US court system as “broken and unfair”.

Mr Trump’s plan to end the DACA programme (deferred action on childhood arrivals) which offers protection to undocumented immigrants who were brought to the United States as children, was delivered a blow when a court in California ruled that safeguards must remain in place pending a legal challenge.

The court ordered the Trump administration to resume renewal applications for the programme, which the president announced he was ending last October. However, he gave Congress six months to come up with a legislative solution to the problem.

An estimated 800,000 people, most of whom have lived and worked in the United States for most of their lives, are awaiting confirmation about their future legal status as Congress seeks a solution to the issue. DACA is one of several immigration matters that are being negotiated between Congress and the White House ahead of a budget deadline later this month.

In a tweet Mr Trump hit out at the decision – the latest legal challenge to his immigration policies.

“It just shows everyone how broken and unfair our court system is when the opposing side in a case (such as DACA) always runs to the 9th Circuit and almost always wins before being reversed by higher courts.”

Speaking at a press conference with the Norwegian prime minister in the White House, Mr Trump also reiterated his commitment to erecting his proposed border wall with Mexico. This followed suggestions the previous day that he could be willing to sign a DACA deal presented by Congress without including funding for the wall.

Asked about the ongoing Russia investigation, Mr Trump said it was a “democratic hoax”.

“There has been no collusion between the Trump campaign and Russians, or Trump and Russians,” he said. “For 11 months, we’ve had this phony cloud over this administration.

He earlier dubbed the Russia investigation a “witch hunt” on Twitter.

Amid reports this week that special counsel Robert Mueller was preparing to possibly interview Mr Trump as part of his investigation into Russian interference in the 2016 presidential election, the president was asked would he be willing to be interviewed. “We’ll see what happens,” he said, though he added it was “unlikely” that he would be called for interview.

Earlier in the day, Mr Trump took aim at the country’s libel laws, describing them as a “sham” and a “disgrace”.

“We are going to take a strong look at our country’s libel laws, so that when somebody says something that is false and defamatory about someone, that person will have meaningful recourse in our courts,” Mr Trump said to reporters as he attended a cabinet meeting. “Our current libel laws are a sham and a disgrace and do not represent American values or American fairness.”

Mr Trump has been a constant critic of the media during his presidency, dubbing many mainstream outlets as “fake news”. He noted that his decision to invite the press to witness almost an hour of a meeting with Republican and Democratic Congress members on Tuesday had provided a boost to ratings for news channels.