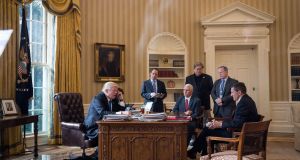 Book Title:
Fire and Fury: Inside the Trump White House

No other country feasts on the political memoir as much as America.

Almost every American president has been faced with the scourge of the political tell-all, as former political operatives, hangers-on and senior administration figures, from secretary of state to CIA director, rush to spill the beans on their time near the centre of power.

Unfortunately for Donald Trump, that moment has come sooner rather than later. Less than a year into his presidency, Michael Wolff has published a new book, Fire and Fury: Inside the Trump White House, one of the first attempts to lift the lid on the Trump presidency.

To paraphrase Trump’s famous warning to North Korea which provides the title of Wolff’s book, Fire and Fury has unleashed a publishing phenomenon that the world has never seen – at least since the latest Harry Potter. Queues of impatient readers lined up for hours outside bookstores on publication night, publishers Henry Holt are racing to print new copies, and an internet meme has been born showing North Korean leader Kim Jong-un chuckling hysterically as he leafs through the book.

From the outset, Wolff’s methodology proves problematic. The author deploys the age-old literary trope of the unreliable narrator

More significantly, perhaps, Fire and Fury has prompted an acrimonious split between Donald Trump and his former chief strategist Steve Bannon and a very public conversation about the 45th president’s mental fitness, more specifically whether there are grounds to invoke the 25th amendment of the constitution allowing the removal of a president.

All the time the author is gleefully looking on as the sales roll in. “Where do I send the box of chocolates?” he asked on NBC’s Today show.

Wolff himself is a problematic figure. Controversy accompanied his 2008 book on Rupert Murdoch, when he was accused of stretching the truth. Within hours of publication, early readers were quick to spot apparent inaccuracies in Fire and Fury. For example, he relays an anecdote which claims that Donald Trump did not know who John Boehner was. In fact, Trump previously played golf with the former speaker of the house and has tweeted numerous times about him.

In the author’s note to the book, Wolff sets out his stated aim and methodology: “to try to see life in the Trump White House through the eyes of the people closest to it.” He claims to have conducted 200 interviews, including with the president, and to have taken up “something like a semi-permanent seat on a couch in the West Wing”, a claim that has been disputed by the White House.

From the outset, though, his methodology proves problematic. Wolff deploys the age-old literary trope of the unreliable narrator. As he plots the story of the Trump presidency, weaving his way through the consciousness of “unnamed” sources, it becomes impossible to see where the perspective of the narrator begins and the objective facts end.

Take this sentence from the opening scene of the book, when his attention turns to Kellyanne Conway: “Donald Trump would lose the election – of this she was sure – but he would quite possibly hold the defeat to under six points.” Who is speaking here? Conway? Wolff? One of the book’s unnamed sources? It’s impossible to tell.

While the rejection of the omniscient narrator may have worked a treat for modernist greats like James Joyce and Virginia Woolf, when a book is supposedly a work of fact, not of fiction, things becomes more problematic.

Nonetheless Fire and Fury is a page-turner. From the get-go, Wolff plunges us into the drama of the Trump presidency. Opening with a dinner between Fox News executive Roger Ailes and Steve Bannon in New York two weeks before the inauguration, Wolff charts the story of the Trump presidency from the early days of the transition period in Trump Tower right into the heart of the West Wing. The book is written in the style of a pacy thriller – “operatives knew the game, and so did most candidates and officeholders,” he writes breathlessly.

This is not a book that dissects major policy decisions or analyses the premises of Trumpism – it is a book more interested in personalities and intrigues. Wolff’s focus is the cast of characters that inhabit the White House. Allegations in the book about the behaviour of Donald Trump may have stolen all the headlines since publication, but Steve Bannon is the real protagonist of Fire and Fury. From the opening chapter Bannon dominates – he “immediately took control of the conversation,” Wolff writes, describing the January dinner with Roger Ailes. Bannon himself has admitted that he co-operated with Wolff for the book.

Indeed, one of the book’s strengths is its depiction of the looming break between Trump and Bannon. He evokes Bannon’s sinking feeling when Trump decides to launch air strikes in Syria – a sign for Bannon that the president is moving away from the nationalist isolationism that underpinned his election campaign.

Similarly, much of the book is devoted to the bitter battle within the West Wing between the Bannon wing and “Jarvanka”, evidently a Bannon description of the president’s daughter Ivanka and her husband Jared Kushner. The withering depictions of Ivanka (“dumb as a brick”) and Jared (“the butler”) are among the most damning in the book, as Wolff presents the Trump White House as a Shakespearean drama where family loyalty rules.

The controversy over the veracity of the book’s most serious claims is likely to continue – the book contains some explosive allegations, including Trump’s desire to sleep with his friends’ wives and a detailed description of Trump dictating a statement on Air Force One refuting reports of his son’s fateful June 2016 meeting in Trump Tower. But, quite apart from the details and gossipy anecdotes contained in the book, Wolff’s real strength is in his analysis of Trump’s personality.

Beneath the outlandish, often funny, descriptions of the president, Wolff presents some insightful assessments

Beneath the outlandish, often funny, descriptions of the president, Wolff presents some insightful assessments: that Trump is simply an emotional, instinctive person who wants to be loved; that he feels desperately wounded by his treatment by the mainstream media; and how Trump has an astonishing capacity for optimism, even when it seems the presidency can’t get any worse.

As the debate about the veracity of Wolff’s book looks set to continue, ultimately Fire and Fury is the kind of book that the 45th president of the United States deserves.

By disrupting the boundaries between fact and fiction, objective reporting and supposition, author and subject, Michael Wolff has written the perfect accompaniment to Trumpism. Having railed against the “fake news” media while showing an utter disregard for truth, Trump can hardly complain that a book on his presidency plays with the facts.

In the post-truth world of alternative facts that Trump has spawned, Fire and Fury is truly a book of its time.