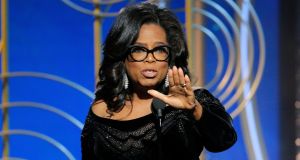 The retired Irish-American television executive whom Oprah Winfrey thanked in her Golden Globes speech for her big break on TV believes she might run for the US presidency.

Dennis Swanson, the first person Winfrey named in her acclaimed speech on Sunday night, hired the celebrity to host AM Chicago in 1983 on the affiliated station he ran for ABC television in Chicago. Within months she turned the show around from the lowest- to highest-rated programme.

Swanson (79), now president emeritus of New York-based business organisation the Ireland-US Council, said that he could see his former protegee running for the White House but that she might be discouraged by the vicious nature of American politics.

“Politics is such a brutal game in the United States right now. I don’t know whether if she sits down and really thinks about it that it is something that she would ultimately engage in,” he said by telephone from his home in Connecticut.

Winfrey’s speech on the importance of tackling gender and racial inequality and the #MeToo movement catapulted her into the US political debate this week as confidantes raised the possibility that she might declare as a Democratic candidate in the 2020 presidential campaign.

Mr Swanson, who retired in 2016 after a 60-year career in US television, said he could see why the Democratic Party would be interested in an attractive candidate such as Winfrey.

“Oprah certainly is a unifier. There is certainly no doubt about that. That is her strength. She has always been able to appeal to a mass audience,” he said.

“But there is a big difference between being a talk show host and a media mogul and being president of the United States.”

Mr Swanson, who speaks frequently in public about his great-grandfather’s roots in Co Mayo, said she might not want to deal with the rough and tumble of American politics.

“If I was Oprah, I would think long and hard about it because she has always been above the fray,” he said. “When you get into presidential politics, you are not above the fray any more.

“You are down in the ugliness of American politics. I don’t know if I would wish that politics on anyone. Look, in her mind, I could see her saying: ‘I could do this, I could win’.”

He recalled Winfrey’s electrifying audition for his Chicago television station on a September weekend in 1983 after she was recommended by a member of his staff.

“I had never seen anybody as good as her. She was unbelievable,” he said.

In a one-on-one conversation after her audition, she raised concerns about whether she would be a success; she was worried about being overweight and black. “I got that figured,” he replied.

He told her: “Don’t change a thing, don’t get a different hairdo, don’t lose weight, don’t dress different. This is the Oprah Winfrey, the Oprah I had here this morning – that’s what I want.”

His only concern, he told her, was whether she could handle success because he had watched people in the television business “push their success up their nose”.

“Do you think I am going to be that successful?” Winfrey asked him.

“I said, ‘Lady, it is going to cost me some money but you are going to shoot the lights out’.”