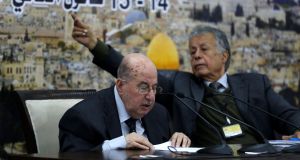 Senior Palestinian official Salim Zaanoun reads a statement at the end of a meeting of the Palestinian Central Council in the West Bank city of Ramallah on Tuesday. Photograph: Abbas Momani/AFP/Getty Images

The Palestinian Central Council has voted to call for the suspension of recognition of Israel as a response to US president Donald Trump’s recognition of Jerusalem as Israel’s capital.

The vote, adopted overwhelmingly by the second-highest body of the Palestine Liberation Organisation (PLO), assigns the organisation’s executive committee to suspend the recognition of Israel until it recognises the state of Palestine along the 1967 borders, revokes the decision to annex East Jerusalem, and stops settlement activity.

The council also renewed its decision to suspend all forms of security co-ordination with Israel.

While withdrawing the PLO’s recognition of Israel could spark an international backlash, it remains unclear if Palestinian president Mahmoud Abbas, who also heads the PLO and the dominant Fatah faction, will implement the council resolution in full.

On Sunday, addressing the council, Mr Abbas made an angry speech denouncing Mr Trump and blaming Israel for the collapse of the Oslo peace accords, accusing Israel of eroding the possibility of a two-state solution.

Hamas, which does not recognise Israel’s right to exist, welcomed Monday’s vote, saying the “real test” would be “to implement it effectively on the ground and put in place the necessary mechanisms” to counter Israel’s activities.

Mr Abbas said the Palestinian Authority will no longer accept Washington as a mediator in the Israeli-Palestinian peace process, and called for internationally mediated negotiations.

In response, the European Union said its position on the Israeli-Palestinian conflict remains “based on the Oslo accords”.

Ramallah’s relations with Washington have deteriorated rapidly since Mr Trump took office with Palestinian leaders repeatedly accusing the Trump administration of being pro-Israel.

Souring relations further, Mr Abbas has refused to meet with US vice-president Mike Pence, who is scheduled to visit the region next week.

Mr Abbas also lashed out at two other American officials considered pro-Israel, US ambassador to Israel David Friedman and US ambassador to the United Nations Nikki Haley, calling both of them a “disgrace”.

“He has torn off his mask and made clear the simple truth that I have been trying to expose for many years: The root of the Israeli-Palestinian conflict lies with the Palestinians’ fundamental and constant refusal to recognise a Jewish state in any borders.”

While there was widespread criticism of the council resolution and Mr Abbas’s angry speech across the political spectrum in Israel, security officials took a more cautious approach, noting that the Palestinian leader stressed that he remains committed to a peaceful resolution to the conflict.

They also expressed confidence that security co-operation between Israel and the Palestinian Authority (PA) would continue in the West Bank.

Mr Abbas’s comments were perceived in Israel as him venting his accumulated rage over the impasse in the peace process and on his understanding that Mr Trump is irrevocably pro-Israel. But Israel believes he has no plan B and is not willing, at least at this juncture, to resume the armed struggle.

Czech health chief quits as coronavirus surges in eastern Europe 17:49
Cyprus blocks EU sanctions on Belarus over rigged election 17:17
Deaths of hundreds of elephants may have been caused by toxic algae 16:45
Downing Street denies reports Boris Johnson went on secret Italy trip 16:07
UK warned it could have 50,000 coronavirus cases a day by mid-October 17:56