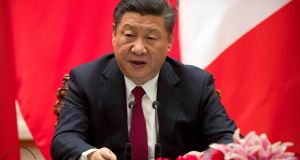 A senior Chinese human rights lawyer and activist, Yu Wensheng, said he has had his licence to practice law revoked, three months after he wrote an open letter criticising President Xi Jinping and the Communist Party.

The letter was the latest of many public criticisms of the Communist Party by Mr Yu.

Since Mr Xi came to power in 2012 there has been a major crackdown on dissenting lawyers and civil society reformers, combined with growing curbs on media and the internet.

Hundreds have been picked up and dozens formally arrested. Some have been given hefty sentences, such as the online activist Wu Gan who was locked up for eight years in December on subversion charges.

Others are still awaiting sentence and another, Wang Quanzhang, who was picked up during the “709 Crackdown”, when hundreds of lawyers and activists were arrested on July 9th, 2015, has disappeared.

As well as the jailings, punishment can often come in the form of bureaucratic hurdles, such as withholding a law licence needed to practice.

Mr Yu said he believed the revocation of his licence was a punishment for his activism but insisted it would make him only more determined and would “not slow me down”.

His wife Xu Yan issued a statement saying her husband had attempted to set up an independent law firm after he left his previous company last year.

Mr Yu was formerly primarily engaged in commercial law, but has emerged as a foremost government critics, vociferous in condemning the 709 crackdown. He was involved in the defence of his colleague Mr Wang, who has not been seen since the 709 crackdown.

The 50-year-old activist tweeted a copy of a letter from the Beijing justice bureau earlier this week, in which it said he would not receive the licence because he had not been employed by a registered law practice for more than six months.

Mr Yu was first detained for three months in 2014 for protesting at not being allowed to meet a client, and again in 2015 when he complained of torture in police custody.

He was also part of a legal team that tried to sue the government over the problem of urban pollution, and he also defended fellow lawyer Zhu Shengwu, who was in trouble for referring to “steamed buns” online – this is sometimes seen as a reference to Mr Xi and satire is not tolerated in China.

Rules governing lawyers were tightened up in late 2016 to allow the authorities greater control of how lawyers speak or conduct themselves. Law firms were also ordered to be more on-message.