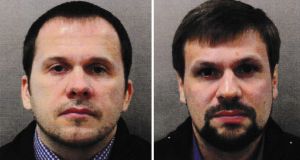 Alexander Petrov (left) and Ruslan Boshirov. Warrants for the extradition of the two Russian Nationals in connection with the novichok poisoning attack on Sergei Skripal and his daughter Yulia in March. Photograph: Metropolitan Police/PA Wire

Two Russian nationals have been named and charged over the novichok poisoning of Sergei and Yulia Skripal in Salisbury, Wiltshire in March. British police and prosecutors made the announcement on Wednesday.

Police said the two men were travelling on authentic Russian passports under the names of Alexander Petrov and Ruslan Boshirov and arrived in the UK on an Aeroflot flight days before the attack. The Crown Prosecution Service said there was enough evidence to charge them. Security sources said the two men were believed to have worked for Russia’s GRU secret service.

The CPS said it had charged the two men with conspiracy to murder the Skripals and DS Nick Bailey, who fell ill after going to the Skripal home after the Russian pair were found slumped on a bench in Salisbury.

They have not been charged with the later poisoning that killed Dawn Sturgess and left Charlie Rowley seriously ill, after they became unwell on June 30th at an address in Amesbury, Wiltshire.

The investigation has recovered CCTV of the two suspects after they flew into Gatwick airport and stayed in the City Stay hotel in east London. After arriving on Friday March 2nd on an Aeroflot flight, they went to Salisbury on the Saturday in what police said they were satisfied was a reconnaissance trip.

They returned to London that day and went back to Salisbury on Sunday, when police say CCTV showed them in the vicinity of the Skripal house. Police believe that after contaminating the front door of the property, they immediately went to Heathrow via train and London underground and flew back on Sunday night at 10.30pm. Health experts said no one they travelled with on the flights or trains is believed to be in danger and no one else is reported to have fallen ill.

Sue Hemming, the CPS director of legal services, said: “Prosecutors from CPS counter-terrorism division have considered the evidence and have concluded there is sufficient evidence to provide a realistic prospect of conviction and it is clearly in the public interest to charge Alexander Petrov and Ruslan Boshirov, who are Russian nationals.”

“It is of course for a jury to decide whether the evidence is enough for them to be sure of the suspects’ guilt. “We will not be applying to Russia for the extradition of these men as the Russian constitution does not permit extradition of its own nationals. Russia has made this clear following requests for extradition in other cases. Should this position change then an extradition request would be made.

“We have, however, obtained a European arrest warrant, which means that if either man travels to a country where an EAW is valid, they will be arrested and face extradition on these charges for which there is no statute of limitations.”

Russia’s foreign ministry spokeswoman Maria Zakharova said: “The names published by the media, like the photographs, don’t mean anything to us. Zakharova said she “again urged Britain to refrain from public accusations” and work with Russian law enforcement authorities to investigate the attack in Salisbury.

The use of the Russian military grade poison on British soil strained already tense relations between London and Moscow. The first use of novichok came in March and targeted Sergei Skripal and his daughter, Yulia, in their Salisbury home.

Mr Skripal had been regarded by Vladimir Putin’s regime as a traitor for selling state secrets and then defecting to Britain. They were both left seriously ill but survived.

Then on June 30th a man and woman wholly unconnected to Russia and the world of espionage were struck down. Dawn Sturgess (44) died about nine days after she and Charlie Rowley (45) were believed to have been exposed to novichok, with both falling ill at their home in Amesbury. Wiltshire.

Mr Rowley has told police he found a box, which he thought contained perfume, in the charity bin on Wednesday June 27th. Inside was a Nina Ricci perfume box, bottle and applicator.

Rowley has told police he put the bottle and applicator together on the day he and Sturgess fell ill. Mr Rowley says Ms Sturgess put some of the substance inside the bottle on her wrists and then fell fatally ill.

Wiltshire’s chief constable, Kier Pritchard, said: “I welcome the significant news today from the counter-terrorism policing network regarding the identification of two suspects who are believed to be responsible for the attempted murders of Sergei and Yulia Skripal. Furthermore, I also welcome the news from the CPS that sufficient evidence has been secured to bring significant charges against these two individuals.