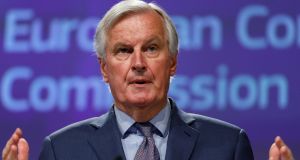 British and European Union officials meet on Thursday to discuss post-Brexit arrangements for Northern Ireland amid frustration in Brussels over Britain’s failure to prepare for a customs border in the Irish Sea. The specialised committee on the implementation of the Northern Ireland protocol, which will hold its first meeting virtually due to coronavirus restrictions, will be co-chaired by British and EU officials.

The meeting is due to take stock of work on implementing the protocol, which will see Northern Ireland remain under EU customs rules after the end of the post-Brexit transition period. EU chief negotiator Michel Barnier last week expressed impatience with Britain’s failure to prepare for the protocol’s consequences.

Two Irish officials will join the EU delegation, which will be led by Philippe Bertrand, a senior official in Michel Barnier’s task force. Officials from other member states will also be on the call.

The British delegation will be led by Brendan Threlfall, a senior civil servant who has dealt with issues relating to Ireland throughout the Brexit negotiations. Andrew McCormick, director general, international relations, will represent the Northern Ireland Executive on the British side.

Cabinet office minister Michael Gove told a Commons committee this week that the specialised committee will determine “the precise nature of how the protocol will be implemented”. EU negotiators stress that the protocol’s requirements cannot be renegotiated within the committee, which should instead focus on the actions that need to be taken to put them into practice.

The specialised committee is one of six subcommittees of the joint committee to implement the withdrawal agreement that governs Britain’s exit from the EU. The agenda for Thursday’s meeting includes “preparatory work on the joint committee’s decisions foreseen by the protocol”.

These include the issue of which goods coming from Great Britain into Northern Ireland should be exempt from EU customs duties because they are not at risk of moving onwards after they arrive in the North.

The British government has rejected a proposal for an EU office in Belfast to monitor the implementation of the protocol after the transition period ends on December 31st.

“Of course it is the case that the EU has the right to monitor the operation of what UK officials are doing but there’s no need for there to be a mini-embassy in Belfast in order for that to happen,” Mr Gove said.