After mass shooting in her state, Ohio mayor leads drive for gun control 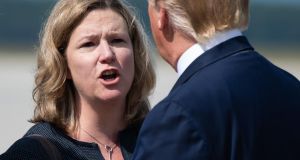 Ever since her city became the scene of a mass shooting on August 4th, Dayton mayor Nan Whaley has been thrust into the heart of the latest debate in the US over gun control. In the early hours of that Sunday morning, nine people were gunned down while socialising outside a popular bar in the city’s Oregon district, the second deadly mass shooting in the US in less than 24 hours.

In the weeks since, the 43-year-old Democrat has emerged as the face of the latest drive to introduce legislation to prevent gun violence. Last month she testified before Congress and has been pressing state lawmakers in Columbus, Ohio’s capital, to tighten gun laws.

Sitting in her office on an unseasonably hot autumn morning, the pain of the attack that shook this city of 140,000 people clearly still stays with her.

“I’ve been through a lot of traumatic things as mayor. I’ve never experienced something that’s so painful as a leader. But to watch the community come together and sort of envelop itself has been so beautiful,” she says.

Since a shooting at Sandy Hook Elementary School in Newtown, Connecticut in December 2012 killed 20 children aged six and seven, as well as six staff members, 2,242 mass shootings have occurred across the US. While the majority of gun deaths are suicides, 14,611 gun-involved murders were recorded in 2018.

In addition, more laws have been introduced since 2012, mostly at the state level, to ease access to guns than legislation meant to make it harder for people to acquire them.

Of the nearly 600 gun-related laws introduced since then, two-thirds have been backed by the National Rifle Association (NRA).

Whaley posits that there are plenty of Republican lawmakers and representatives who would like to see tighter gun laws introduced, and who have said as much in private, but are afraid to speak up in part because president Donald Trump has failed to commit to moving on the issue.

Whaley isn’t sure whether HR 8, a bipartisan Bill to introduce background checks on gun purchases, will become law. “It sits at the Senate door. I think the citizens of Dayton will be happy if something moves around background checks,” she says. “It’s heartbreaking to watch this kind of loss and then see your government take no action.”

It’s no surprise that Whaley’s no-nonsense style and rising profile have seen her gain plenty of new critics. Trump accused her and Ohio Democratic senator Sherrod Brown of lying about and misrepresenting his visit to survivors of the Dayton shooting in August. She responded by calling Trump a “bully and a coward”.

When the police officers who shot dead the Oregon District perpetrator were honoured at a White House event last month, Whaley, who was in Washington at the time, wasn’t invited. “We reached out [to the White House] and told them ‘Hey, we’d be happy to attend’. And I think the direct line they said to my staff was: ‘not gonna happen’,” she says. “I mean, quite frankly, I’m relieved in some sense I didn’t have to see the man again, but I would have liked to have been there just to witness the officers having that moment.”

Whaley is under no illusions that the political system in America is in desperate need of reform – largely, she says, because of the damage caused by gerrymandering and lobbyists’ money. Democracy in the US, she says, is in a very dangerous place.

“Republicans in Congress are not afraid of the left – they’re afraid of their own people. What a strange place to be in,” she says. By contrast, on the local political level, Republicans and Democrats have decent working relations, she says.

Ohio’s 18 electoral votes may be harder to win than in the past, but the decision by Democrats to hold their most recent debate in Westerville on October 15th shows the state is still an important piece of the puzzle for party leaders.

Whaley is not a typical US politician. When she announced an ultimately unsuccessful run for Ohio governor in 2017, she did so at a local brewery. She meets office visitors and conducts media interviews without the help or presence of aides.

Whaley’s father, a former iron worker and union man at General Motors, and her mother, a clerk treasurer, guided her into politics. Raised in Indiana, she first came to Dayton to study chemistry at the University of Dayton. Not long after graduating she turned down a job with the Democratic National Committee in Washington, DC to stay in Ohio.

“When I decided to go to Dayton my parents said, ‘if you go to Ohio, they decide presidents, so you need to work on [the Clinton] campaign,” she says.

Whaley has been called a “rock star” by the Cincinnati Enquirer and a run for US senator or the Ohio governor’s office could be on the cards for her in 2022.

Where does she see herself in 10 years? “I don’t know,” she says, exhaling and spying the time on her phone. “I hope my husband will let me have a dog by then; I’m just trying to get through this year.”