Maureen Dowd: Can Little Mike throw Big Baby out of the crib?

Bloomberg v Trump would be a battle of New York giants, but is there much between them? 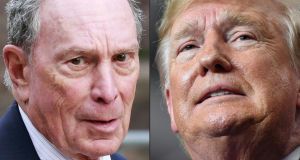 New York billionaires Michael Bloomberg and Donald Trump: Both have been accused of having a sexist streak, even though they supported Hillary Clinton at times. Photographs: Kena Betancur and Mandel Ngan/AFP via Getty Images

We’ve had the baby. So why not the nanny?

Donald Trump has turned the White House – and America – into his crib, wailing and spitting up and throwing things. Republican lawmakers have been consigned to diaper duty. So maybe it’s fitting for Mrs Doubtfire to pop in to lay down the law in this federally funded nursery.

As in love, voters in presidential races often look for the opposite of what they’ve had. George W Bush was uninformed and impulsive, so enter Barack Obama. Obama painted cautiously in grey tones, so enter the kaleidoscopic Donald Trump. Now Trump’s vertiginous reign and policies on climate, guns and trade may have inspired the pragmatic Michael Bloomberg to step up as his opposite. Someone from Bloomberg-world told Axios that if the former mayor of New York jumps in, he will spend “whatever it takes” to defeat Trump.

“All across America, people are clutching their Big Gulps,” David Axelrod cracked. It’s not a good sign for Democrats – or a flagging Joe Biden – that the 77-year-old plutocrat is casting himself as the saviour of the party. The trembling Democratic donor class was overjoyed that a Wall Street guy might jump in. But a Bloomberg bid could open the door for Elizabeth Warren to run away with the nomination.

Still, it would be undeniably entertaining to have a stinging face-off between a couple of rich, caustic New Yorkers who have skyscrapers known by their names blocks apart. “Little Michael” as Trump calls Bloomberg, versus the Big Fraud, as Bloomberg thinks of Trump. Maybe they could just conduct the whole campaign at Hudson Yards. One is a real deal-maker who cares about public policy and one is a fake deal-maker who only cares about himself. One self-made billionaire who’s good at business would mock the so-called billionaire and bankruptcy king who needed a constant cash flow from daddy Fred. One is in the media business and one denounces the press as degenerates, lowlifes and enemies of the people. One is a genuine philanthropist and one was just ordered to pay $2 million in damages after admitting money raised by his charitable foundation was used in part for his presidential bid and to settle business debts. One is totally controlling and one is totally out of control. One rants about trans fats and one gorges on them.

Both of these salesmen can be charming or thin-skinned and arrogant. Both have politically fluid histories. Both have their feet to thank for keeping them out of Vietnam: Bloomberg had flat feet and Trump (supposedly) had bone spurs. Both have been accused of having a sexist streak, even though they supported Hillary Clinton at times and have voiced appreciation for smart women. And both men have talked openly about their love of beautiful women.

As Bloomberg told me in 2001, right after the bachelor announced he would run for mayor: “Nobody has ever accused me of not being interested in women. I have the other problem when they write the story.”

Trump once had a date with Candice Bergen and Bloomberg had a dinner with Diana Ross. Bloomberg talked about his love of Bond girls but, unlike Trump, preferred more mature women in real life.

“I find women my age more interesting, I guess,” he told me. “Maybe it’s just that I have less in common with younger women. It’s also safer. Somehow or other, the wives of your friends find it much more reassuring.”

Trump didn’t waste any time trashing a possible new opponent, focusing on looks, as usual. Mr Rogers said that making people feel less than they are was the greatest evil but for Trump, it’s the most fun.

“He doesn’t have the magic to do well,” the president said of Bloomberg as he left the White House on Friday morning for a trip to Georgia, adding: “Little Michael will fail.” While it is true that “kinetic TV personality” are not words you would connect to Bloomberg, the media mogul does know how to go for the jugular. Remember his Philly smackdown at the Democratic convention? In 2015, when Bloomberg the company reported that Trump was worth only $2.9 billion, Trump got hot under the Brioni collar. He suggested that Bloomberg the man had encouraged his reporters to write a lower number because he was jealous that Trump was running for president and, referring to the Bloomberg financial data terminals, scoffed: “I wouldn’t have one of their little screens.”

Told recently that Ivanka Trump felt betrayed by his speech at the Democratic convention, because she considered him a good friend, Bloomberg did some scoffing of his own, saying that they had never been close.

Whenever I talked to Bloomberg over the years about running, it was clear he wanted to and felt he would do a great job as Nanny-in-Chief. But all the polls he commissioned made him think it was not feasible. He didn’t want to run against Hillary, and at first he didn’t see a path to run this time. But watching Biden implode and Mayor Pete climb and seeing the gazillion-dollar “Medicare for All” plan of Warren – whom Bloomberg thought had a shot as recently as this autumn – all combined to tempt him towards a 2020 race.

As the Times’ Michael Grynbaum tweeted, slyly summing up the Gotham derby: “How many New York City personalities can one country handle?”

But then, Trump hasn’t been too friendly to New York lately. He changed his primary residency to Palm Beach and, on Friday, when he was asked about the fine on his foundation, he barked: “New York is a corrupt state.”

And he should know. – New York Times