Jordan to resume control over land leased to Israel 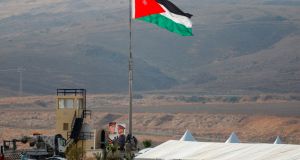 A picture taken from the Israeli side of the border shows Jordanian soldiers raising the national flag ahead of a ceremony at the Jordan Valley site of Naharayim, also known as Baqura in Jordan. Photograph: Menahem Kahana/AFP via Getty

Jordan’s king has announced “full sovereignty” over two pieces of land leased by Israel, ending a 25-year arrangement which was part of the countries’ landmark peace agreement.

King Abdullah II said in a speech to the government’s new cabinet that Jordan would end the “annex of the two areas, Ghumar and Al-Baqoura, in the peace treaty and impose our full sovereignty on every inch of them”.

Israel, which has controlled the lands for more than 70 years, had been permitted to lease the areas under the 1994 peace agreement.

One of the areas, a popular visitors’ site in northern Israel, is known in Hebrew as the “Peace Island”.

But with relations cool, the king announced earlier this year that he would end the lease, with Jordan set to reclaim full control of the areas this week.

The king said: “I announce the end of the annex of the two areas, Ghumar and Al-Baqoura, in the peace treaty and impose our full sovereignty on every inch of them.”

This development marks a new blow to relations that began with great optimism but have steadily deteriorated.

Following up on a historic interim peace deal between Israel and the Palestinians a year earlier, Israel’s then-prime minister Yitzhak Rabin and the late King Hussein of Jordan signed a peace agreement on October 26th, 1994, delivering moving speeches promising warm relations and a better future.

It was only the second peace deal between Israel and an Arab country, following Egypt.

The accord remains a vital strategic asset for both countries, who maintain tight security co-operation and joint economic projects.

But with little progress towards a Palestinian state, the close contact has not trickled down to the average citizen — especially in Jordan, where most people have Palestinian roots.