The Conservative Party has been criticised after they released an edited clip of Labour's Brexit spokesperson Keir Starmer on their social media channels. Video: Reuters/Conservatives/ITV 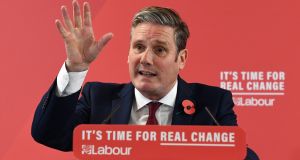 British prime minister Boris Johnson’s election campaign launch got off to a poor start on Wednesday, when his party chairman was forced to defend distributing a doctored video clip of a rival Labour Party politician.

As Britain heads towards a December 12th election that could shape the fate of Brexit, some politicians have expressed concerns that misleading information - known as “fake news” - could spread swiftly across social media.

Mr Johnson’s Conservatives distributed a doctored video clip of Labour’s Brexit spokesman Keir Starmer, editing out a key response in an interview to give the impression that the party had no answer for Brexit.

Mr Starmer was grilled by ITV on Tuesday over the party’s Brexit plans, including rigorous questioning on its policy of trying to negotiate a new divorce deal and then holding a referendum in which its MPs might then campaign against the agreement they had struck.

In a heavily edited video of the interview published by the Conservatives, Starmer was shown being asked by ITV presenter Piers Morgan why the EU would give a Labour government a good Brexit deal.

Mr Starmer was shown apparently blinking, startled, faltering and uncomfortable behind the red slogan: “Labour has no plan for Brexit.”

In the actual interview, Mr Starmer did not falter but answered immediately: “Well Piers, I have been talking to the EU, to political leaders across the EU 27 countries for three years, and I know very well what the parameters are of any deal that they would do with a Labour government.”

Conservative MP Johnny Mercer said the video he had tweeted had been doctored and apologised.

“It would appear this has inexplicably been doctored at the end. I apologise and will remove it. The original interview was bad enough - I have no idea why this needed altering,” Mr Mercer said.

Yet Conservative Party Chairman James Cleverly, speaking to ITV on Wednesday, repeatedly refused to either accept that the clip had been doctored or to apologise.

“The reason we clipped the video was to make it shorter because Keir’s answers rambled on,” Mr Cleverly said.

“I just find that absolutely staggering: to shamelessly re-edit a video to make it look like something completely different, give a completely misleading and different version to what actually happened to make your opponents look stupid,” Mr Morgan said.

“And when you are caught - you just don’t have the good grace to say: ‘Yeah, we shouldn’t have done that - I’m sorry’.” – Reuters