Hong Kong: Violence spills on to streets after arrest of politicians 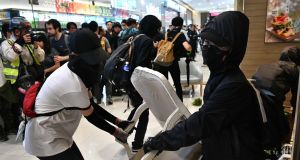 Protesters gather materials, taken from a ransacked shop, to use for a barricade at the Citywalk shopping mall in Tsuen Wan in Hong Kong. Photograph: Anthony Wallace/AFP via Getty

Hong Kong police fired tear gas to break up rallies after protesters in Hong Kong blocked roads and trashed shopping centres across the New Territories on Sunday following the arrest of pro-democracy politicians.

Pro-democracy protesters vandalised a train station in the central new town of Sha Tin and smashed up a restaurant perceived as being pro-Beijing, overturning tables and smashing glass panels, two weeks before district council elections in the Chinese-ruled city.

Violence spilled out onto the streets of Tuen Mun outside the “V city” mall, with running battles between riot police and protesters.

Pictures showed a circular, red welt and bruise on the upper arm of one of its reporters who said she had been hit by a tear gas canister in Tsuen Wan, to the west of the New Territories.

The rail station was closed in Sha Tin, amid scuffles between police and protesters young and old, on a day of planned shopping mall protests throughout the territory. Shopping districts across the harbour on the main island were quiet.

“Radical protesters have been gathering in multiple locations across the territories,” police said in a statement.

“They have been loitering in several malls and vandalising shops and facilities therein, neglecting the safety of members of the public.”

Activists complain that the government of Chief Executive Carrie Lam and Beijing are eroding the autonomy and Western-style civil liberties promised to Hong Kong when the former British colony returned to China in 1997.

On Saturday, police announced the arrest of the six politicians on charges of obstructing the local assembly during a raucous May 11th meeting over the extradition bill. All were freed on bail.

The arrests were made a day after protesters mourned the death of a university student who fell from a car park when police fired tear gas at protesters.

The circumstances of the death are unclear, but many accuse police of using heavy-handed tactics, including widespread use of tear gas and pepper spray. Police denied pushing the student during the incident on Monday or delaying emergency treatment.

The territory is preparing for elections on November 24th that are viewed as a measure of public sentiment towards the government.

Pro-democracy politicians criticised the government clampdown as an attempt to provoke violence following the student’s death to justify cancelling or postponing the elections.

More than 3,300 people have been arrested since the start of the protest movement. – AP