Kiev says all preconditions are being met for summit with Russia, Germany and France 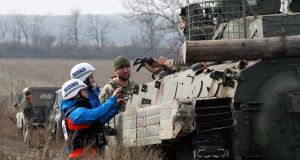 Government soldiers and Russian-led separatists have started withdrawing from another section of the frontline in eastern Ukraine, in a move that Kiev hopes will pave the way for a long-awaited peace summit to take place this month.

Troops and hardware began pulling back from both sides of the frontline near the village of Petrivske on Saturday, having in previous weeks withdrawn from the Zolote and Stanytsia Luhanska areas as part of a confidence-building process.

The withdrawal from Petrivske took place after a delay of several days following shelling in the area, and exchanges of artillery and gunfire still occur almost every night in this sixth year of a war that has killed more than 13,000 people.

Yasar Halit Celik, the chief monitor for the Organisation for Security and Co-operation in Europe (OSCE) in eastern Ukraine, confirmed the start of the withdrawal.

“Additional [OSCE mission] patrols, supported by static cameras and unmanned aerial vehicles, have been deployed,” he said. “We welcome any steps towards progress and stand ready to assist.”

Ukrainian president Volodymyr Zelenskiy said that by removing troops from the three designated areas and accepting a plan on how to sequence elections in war-torn areas and grant them special status within Ukraine, Kiev has met all the Kremlin’s preconditions for peace talks that it hopes will take place in November.

William Taylor, the US acting ambassador to Ukraine, said that when visiting Zolote and Petrivske in recent days, he “saw first-hand how Ukraine is advancing peace by taking steps toward the disengagement of its forces in a deliberate manner while ensuring the safety of civilians”.

“It is time for Russia to demonstrate a real commitment to peace,” he added.

Russian president Vladimir Putin has shown little enthusiasm for an urgent summit, however, saying he is happy to talk but only once extensive groundwork has been done to allow clear-cut decisions to be taken at any summit.

Mr Zelenskiy, a former comedian who won a landslide presidential election victory in April, is eager to push for peace while his ratings remain high, and a new government led by his fledgling party is pursuing an ambitious reform programme.

Major obstacles remain to any peace deal, however, including the government’s stated refusal to grant an amnesty to all militants or to change Ukraine’s constitution to enshrine broad autonomy for the eastern Donbas region.

Mr Zelenskiy also insists that local elections can only take place in Donbas once all Russian troops have left, government forces have regained control of the country’s entire eastern border and Ukrainian political parties and media are operating in areas now run by the separatists.

Moscow and the militants are unlikely to accept those conditions and, even if they did, the implementation process would be long, arduous and extremely vulnerable to sabotage.

Mr Zelenskiy’s push for peace also faces criticism from Ukrainian political opponents and nationalist groups, who accuse him of making dangerous concessions to the Kremlin and its proxies in Donbas; thousands of people have protested in Kiev against any “capitulation” to Russia at the negotiating table.