Verdict on allegedly genocidal attacks on Rohingya due from UN court 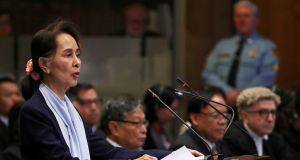 Myanmar’s leader Aung San Suu Kyi at the International Court of Justice in The Hague in December: claims the crackdown in 2017 was a legitimate response to militant violence. Photograph: Yves Herman

The UN’s top court will decide on Thursday whether to impose “urgent measures” on Myanmar to prevent further allegedly genocidal attacks on its Rohingya Muslim minority – days after a separate inquiry concluded that while war crimes may have been committed, there was no genocide.

While the world waits to see if the UN court was convinced last month by Myanmar’s civilian leader, Aung San Suu Kyi, that its crackdown in 2017 was a legitimate response to militant violence, the inquiry led by a Filipino diplomat found there had been “no intent to destroy” the Rohingya.

The four-member Independent Commission of Enquiry (ICOE) was led by ambassador Rosario Manalo of the Philippines, and included Kenzo Oshima, former UN under-secretary for humanitarian affairs; Aung Tun Tet, a former senior official with Unicef; and U MyaThein, representing Myanmar.

Its key finding, delivered to Myanmar’s president on Monday, was that while some of the military – known as the Tatmadaw – may have used disproportionate force and committed serious human rights violations, including crimes against humanity, those crimes “did not constitute genocide”.

Despite the “killing of innocent villagers and destruction of their homes”, the ICOE said, there was “insufficient evidence to argue, much less conclude, that the crimes committed were undertaken with the intent to destroy, in whole or in part, a national, ethnic, racial or religious group”.

The ICOE, however, has been hugely controversial. Its report is at odds, in particular, with a UN fact-finding mission that accused Myanmar of failing to prevent genocide during and since its “clearance” campaign which forced 750,000 Rohingya to seek refuge in neighbouring Bangladesh.

Human Rights Watch said the ICOE report was “far from transparent”. The Global Justice Centre described it as “a whitewash”. And the Burmese Rohingya Organisation in the UK warned that it was timed to deflect attention from the ruling of the International Court of Justice (ICJ) on Thursday.

The ICJ case alleging genocide by Myanmar’s military was taken by the West African state of the Gambia, backed by the 57-state Organisation of Islamic Co-operation.

During the three-day hearing in mid-December, Nobel laureate Ms Suu Kyi addressed the judges twice, claiming that the country’s system of military justice was taking action against soldiers who had used disproportionate force and warning that the case could reignite the crisis.

The Gambia alleges Myanmar’s military carried out a “systematic” campaign of mass murder, rape, torture and disappearance, and claims there is evidence that this campaign is still continuing – an allegation Ms Suu Kyi vehemently denied.

It has asked the court to order “emergency measures” against Myanmar to ensure there is no further violence targeting the Rohingya, that there is no destruction of evidence, and that leaders of the country’s military co-operate with UN investigators.

If the court rules in the Gambia’s favour on Thursday and orders emergency measures, it may then move on at a later date to hear the substantive case for genocide against Myanmar – a case that could continue for a number of years.