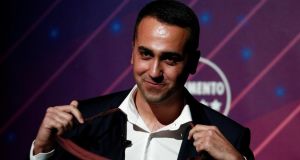 Luigi di Maio’s unintentional legacy may have been to channel voters towards the far-right League party, led by Matteo Salvini. Photograph: Guglielmo Mangiapane/Reuters

Luigi Di Maio, the youthful but stern-looking face of the Five Star Movement, propelled the grassroots movement to power by capitalising on anti-establishment anger in Italy’s poorer south. Nineteen months and two government coalitions later, he is relinquishing the leadership of a party haemorrhaging supporters and unsure of its future.

After months of infighting within Five Star – which has seen the defection or expulsion of 27 of its representatives in parliament – the 33-year-old politician this week resigned as party leader. After winning 33 per cent of the vote in 2018 parliamentary elections, recent surveys suggest fewer than 16 per cent of Italians would vote for Five Star in new polls.

Five Star’s woes are a cautionary tale for anti-establishment parties in Europe, illustrating the danger of reaching the corridors of power for those movements that rail against the ruling classes.

“Five Star lost their virginity as soon as they started to govern,” said Luigi Curini, professor of political science at the University of Milan. “From being an anti-establishment movement, completely detached from the current political system, they have gradually been absorbed by the system they were fighting.”

The political perils for Five Star were palpable from the start. In June 2018, the former drinks vendor at the stadium of Napoli football club angered activists by agreeing to form an unlikely governmental coalition with the anti-immigration far-right League of Matteo Salvini. That coalition fell apart in the summer of 2019, pushing Five Star to team up with its once avowed establishment enemies, the Democratic party, to stay in power.

The party leadership’s move towards the political centre has resulted in a split among its voters – some have embraced the anti-migration and security stance of the League, while others have deserted the party in disgust at its political dalliances with first Salvini and then the centre-left PD. In the process, Salvini has made steady inroads into Five Star’s core regions in Italy’s south, notably in Puglia.

An early militant of the Five Star Movement when it was an online protest initiative created by eccentric Milanese web entrepreneur Gianroberto Casaleggio and fronted by comic and blogger Beppe Grillo, Di Maio represented a new generation of young radicals who promised to upend the country’s sclerotic and corrupt political establishment. He first entered Italy’s parliament in 2013 at the age of 26.

Some analysts say it is too early to discount him as a political force. His resignation comes ahead of a possible Five Star defeat in elections in Emilia Romagna this weekend.

“Di Maio led the transition of the Five Star Movement from an antagonistic force to a ruling party. Now this phase has ended and his time has run out too,” Emiliana De Blasio, professor of political innovation at LUISS university in Rome, said.

“Di Maio has an incredible political instinct. He has abandoned the ship at a time when it is about to crumble – a political move to be observed carefully at a time when there is also great nervousness about the elections in Emilia Romagna, and a possible defeat of the Five Star Movement. He is ahead of his time.”

The party is now likely to fight on in its coalition with the PD, with both groups desperate to avoid new elections that would almost certainly see a triumph for the Italian right.

But in March the movement’s leadership will hold a summit that is expected to reveal splits between those who want to move towards the PD and those who want to rekindle the radical and anti-establishment flame. It is unclear if Di Maio will play a role.

One of the issues weighing on Five Star’s future is financial: a number of rebel Five Star lawmakers have stopped donating part of their parliamentary salaries to the movement, partly in protest at Di Maio’s leadership.

According to the Five Star Movement’s internal rules, every MP has to give up a minimum of €2,000 a month. They are required to donate an additional €300 for the Rousseau online voting platform used to consult its grassroots members.

“Some of our MPs gradually got used to the comforts and the privileges of the political class we wanted to destroy,” said Massimo Lazzari, a 64-year-old Five Star activist from Rome who has been involved since the birth of the party.

Curini says Five Star was unprepared for office, with few lawmakers having the experience or discipline to push through its radical programme.

“They became a victim of their own success,” he said. “They got so many votes that they weren’t prepared to fill the ranks. They dragged into politics too many people they couldn’t rely on and lost control over them.”

For now, its unintentional legacy may have been to channel voters’ anti-establishment revolt towards Salvini’s nativist, anti-immigrant League, says Jacopo Iacoboni, an author and journalist who has written two books on Five Star.

“[It] started as an experiment from a visionary web entrepreneur, and they ended up helping a huge shift of Italian voters towards the far-right,” Mr Iacoboni said. – Copyright The Financial Times Limited 2020