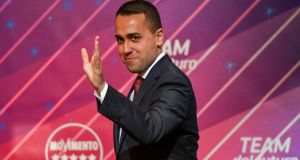 Luigi Di Maio, who is also Italy’s foreign minister, said that a party conference to be held in March would decide the future organisation of Five Star and that his decision would help the movement to continue its political development. Photograph: Alberto Pizzoli/AFP via Getty

Luigi Di Maio has stepped down as leader of Italy’s ruling Five Star Movement after a collapse in support for the anti-establishment party, less than two years after it surged to electoral victory and formed a populist coalition government.

His resignation follows a wave of defections by Five Star MPs who have questioned the direction of the party under Mr Di Maio’s leadership. The party is also facing heavy defeat in a regional election on Sunday in Emilia-Romagna, one of Italy’s traditional left-wing heartlands.

“The time has arrived to relaunch ourselves,” Mr Di Maio said at a presentation at Hadrian’s Temple in Rome. “Today an era closes.”

The 33-year-old, who is also Italy’s foreign minister, said that a party conference to be held in March would decide the future organisation of Five Star and that his decision would help the movement to continue its political development.

Five Star governs Italy in coalition with the centre-left Democratic party (PD), a traditional centre-left force once viscerally opposed by Five Star activists. “The government must go ahead,” said Mr Di Maio. “We must have the time to clean up the mess made by those who governed for 30 years before.”

Nicola Zingaretti, leader of the PD, said he did not believe Mr Di Maio’s resignation would destabilise the government. “It is a sign of internal debate within the Five Star Movement, which I respect,” Mr Zingaretti said.

The Five Star-PD coalition has suffered multiple crises since taking office in September but has so far been resolute in wanting to stay together to avoid fresh elections.

Another national vote could pave the way for a return to power by the anti-immigrant League, whose leader Matteo Salvini abruptly ended a coalition with Five Star last year.

Mr Salvini, Italy’s most popular politician, has worried investors with a confrontational stance towards Brussels and promises to abandon the strictures of EU budget rules.

His party is expected to make big gains in Emilia-Romagna at the expense of the PD.

Mr Di Maio won the leadership of Five Star in 2017 and turned it into Italy’s largest political force when it won 33 per cent of the vote in the following year’s national election in 2018.

The party formed a coalition with the League, sparing investor fears of a damaging stand-off with EU institutions. However, Five Star has been less radical in office than many of its supporters wanted, with its flagship welfare policies watered down.

Polling now shows that the party’s support has almost halved to 16 per cent, stoking anger among activists and lawmakers who are also unhappy at an alliance with the PD that many see as a betrayal of Five Star values.

Mr Di Maio had in recent weeks attempted to grapple with his internal critics by pledging to involve more lawmakers in party decisions. On Tuesday, two more Five Star MPs deserted the party and moved to the so-called mixed group in Italy’s parliament.

Five Star began life in 2009 as an online protest movement masterminded by Gianroberto Casaleggio, a web developer, and fronted by the politically incorrect comedian Beppe Grillo.

Casaleggio died in 2016, with his son Davide taking over the running of the party along with a committee of senior figures.