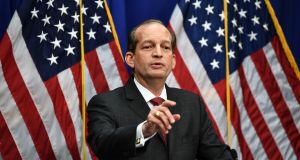 US secretary of labour Alexander Acosta at a press conference on Wednesday, where he defended his handling of a secret plea deal he made a decade ago with disgraced financier Jeffrey Epstein, who had been accused of sexually abusing young girls. Photograph: Brendan Smialowski/AFP/Getty Images

US secretary of labour Alexander Acosta defended his role in reaching a plea deal with disgraced financier Jeffrey Epstein more than a decade ago, amid growing calls from Democrats for his resignation.

Mr Acosta, a former federal prosecutor in Florida, was appointed by Donald Trump shortly after his inauguration to the position of labour secretary.

But the 50 year-old Miami native has come under intense political pressure in recent days after prosecutors in the southern district of New York announced fresh sex trafficking offences against Mr Epstein.

Mr Acosta was the United States attorney for the southern district of Florida when Mr Epstein, a high-profile financier with social links to former president Bill Clinton and president Donald Trump, struck a non-prosecution agreement with prosecutors in 2008, avoiding a federal prosecution.

The Florida resident pleaded guilty to procuring a young person under 18 for prostitution as part of a co-operation agreement, spending more than a year in prison, though most of his time was spent on work release, allowing him to leave the prison each day. In February, the Justice Department opened an enquiry into how federal prosecutors handled the case.

Meanwhile, prosecutors for the Southern District of New York announced this week that they had arrested Mr Epstein on fresh trafficking charges. According to the indictment, Mr Epstein lured underage girls to his homes in New York and Florida between 2002 and 2005 and paid them to engage in sex acts. He remains in jail in New York awaiting his bond hearing next week.

Without the work of our prosecutors, Epstein would have gotten away with just that state charge

In a lengthy and highly anticipated press conference in Washington on Wednesday, Mr Acosta defended his role in the case, arguing that without his actions, Mr Epstein would have avoided jail.

“Without the work of our prosecutors, Epstein would have gotten away with just that state charge” and avoided jail time, he said. “He was and is a sexual predator.”

He said that the decision to strike a non-prosecution agreement with the accused was a “roll of the dice”, noting that many of the victims at the time were scared to come forward.

“I wanted to help them. That is why we intervened. And that’s what the prosecutors of my office did – they insisted that he go to jail and put the world on notice that he was and is a sexual predator,” he said at the news conference.

However, he declined to say if he regretted the decision.

So far, Mr Trump has backed the labour secretary. On Monday the president noted that the events in question had happened a long time ago, adding that he felt “badly” for Mr Acosta.

He also distanced himself from Mr Epstein, who he knew from his time at his Mar-a-Lago estate in Palm Beach, Florida, where Mr Epstein also had a home. While this week the US president said he was “not a fan” of the 66-year-old financier, he previously described him as a “terrific guy”.

Democrats have called for Mr Acosta’s resignation, while more victims have come forward in recent days

House speaker Nancy Pelosi said that Mr Acosta had engaged in “an unconscionable agreement” with Mr Epstein that prevented victims from seeking justice. She also pointed out that Mr Trump had known about these events when he appointed him to the cabinet.