Kathy Sheridan: Kim Darroch was undone by the enemy within 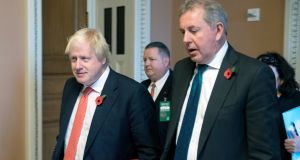 Boris Johnson, then foreign secretary, with Kim Darroch, British ambassador to the US after a meeting on Capitol Hill in Washington in November 2017. According to media reports, US president Donald Trump has said he will no longer work with Darroch after emails in which the ambassador referred to the White House as a ‘uniquely dysfunctional environment’ were leaked. Photograph: Michael Reynolds/EPA

The fact that Kim Darroch qualified as a zoologist must have been a marvellous asset in the Foreign Office. It gave the UK ambassador to Washington a framework by which to judge the behaviour of humans.

“The stories about White House knife fights are, we judge, mostly true . . . This is a uniquely dysfunctional environment”, he reported in one “telegram” (diplomatese for an email, apparently) to London.

Darroch knows dysfunctional. He was UK ambassador to Brussels when Nigel Farage was kicking and scratching his way to UKIP’s 1,000-year wreck. On Sunday, Farage’s hard man and Leave EU communications director, Andy Wigmore, tweeted: “Worth noting that Nigel Farage physically kicked little Kim out of his office in Brussels when Kim tried to bollock Nigel, who just grabbed him, gave him a massive wedgie and told him to jog on. Lol . . . Kim cried like a baby”. Note “little Kim”. That – if it ever happened – was about 2012, four years before the referendum, several years before Trump’s trademark “little Marco” and “crooked Hillary” invective. It’s what they call straight-talking in some political circles.

What purpose Darroch’s resignation would serve is not clear, beyond allowing the US take back control of the UK

The third self-styled Bad Boy of Brexit, Arron Banks, the single largest political donor in British history (to Leave EU) and startlingly generous patron to Farage, completed the thumbs-up trio famously photographed with the President-elect at his golden lift in Trump Tower. And Banks – under several police investigations into the source of that massive donation to Leave EU – had his Brexit diary ghostwritten by none other than Isabel Oakeshott, passionate Brexiter, Farage fan and the journalist who landed the telegrams scoop for the Daily Mail. She has lamented the “travesty” that Farage has not been elevated to the House of Lords.

Imagine the scene at the end of an episode of Poirot where Hercule assembles all the suspects in the library of the country house for the big reveal – in this case, on who leaked the telegrams. This lot would be sniggering about giving him a wedgie while Farage would be considering how to wangle an invitation for the weekend with the titled owners.

Farage’s quest for a title or some form of respectability has always been particularly manifest in his bootlicking apparitions somewhere in Trump’s shadow. Back during Trump’s transition, he openly angled for the Washington embassy post – to which Darroch had been appointed the previous January – and duly won the president-elect’s tweeted endorsement in a breach of protocol that pole-axed the diplomatic world (bless their innocence back then). “Many people would like to see Nigel_Farage represent Great Britain as their Ambassador to the United States. He would do a great job!”. What a surprise then when Farage was one of the first out of the traps this week to call for Darroch’s resignation.

What purpose Darroch’s resignation would serve is not clear, beyond allowing the US take back control of the UK, as well as incentivising British diplomats to give glowing private endorsements to every regime. It might also mean that all communication must henceforth be conducted on a discreet park bench by the Potomac, face to face, following a full-body frisking for recording devices or notebooks.

The fact that some cabal conspired to leak the cache of cables at this time, detonating Britain’s desperate efforts to royally butter up the White House incumbent for trade purposes, tells us everything about the feral rage coursing through Brexit patriots. Nothing in the emails, gathered over a couple of years by the leaker, justified their publication beyond an agenda to disrupt and destroy, though it might be useful if that agenda in itself were to stoke lethargic minds.

But that impulse to lay waste to hard-won values inhabits a large proportion of the Tory party membership who are prepared to destroy the economy and the union for the Brexit ideal. If they’re ready to blow up their own country, what would they do to us?

A poll of the membership carried out for Channel 4’s Battle for the Tory Party, aired on Monday, suggests more than half believe Trump would make a good prime minister. Many want the death penalty restored and are sceptical about climate change. The programme also focused on the rise of Turning Point UK, the British branch of the pro-Trump youth group, heavily backed by John Mappin, a pro-Trump, gun-toting, anti-vaxxer, King Arthur-obsessed Scientologist, who operates a Cornish hotel called Camelot Castle. The organisation is endorsed by Farage as well as by high-profile Tories such as Jacob Rees-Mogg and Priti Patel. Property developer and long-time Brexiter Robin Birley, who recently attended one of its events, has given £20,000 to Boris Johnson’s campaign.

The fact that Johnson was foreign secretary up to last year now seems like a trick of the memory. According to a report in the Sun, intelligence chiefs withheld sensitive information from him over fears that he couldn’t be trusted with it. This is the territory inhabited by Kim Darroch and colleagues, who are perfectly capable of their own perfidy, no doubt, but are personally coming up against a torch-burning, home-grown enemy whose shape is still unclear.

The near-united outrage at the leaks in the House of Commons perhaps marks a turn in the road. This is the summer of Brexit. It feels like a fierce tribal battle is reaching a climax. After this week, there must be many more serious minds focused on how it ends.