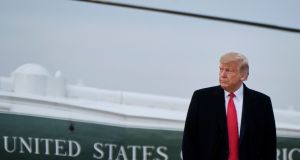 President Donald Trump tweeted: “Any fair-minded person watching the Senate trial today would be able to see how unfairly I have been treated and that this is indeed the totally partisan Impeachment Hoax that EVERYBODY, including the Democrats, truly knows it is.” Photograph: TJ Kirkpatrick/New York Times

Donald Trump’s lawyers have opened their impeachment trial defence by asserting the US president “did absolutely nothing wrong” when he asked Ukraine to investigate political rival Joe Biden.

Pressing the Republican-led Senate chamber to acquit Mr Trump of charges that he abused his power and obstructed Congress, his lawyers accused Democratic prosecutors of omitting key evidence when they presented their case.

Mr Trump’s legal team plan an aggressive, wide-ranging defence asserting an expansive view of presidential powers and portraying him as besieged by political opponents determined to undo the result of the 2016 election and ensure he will not be re-elected this November.

“They’re here to perpetrate the most massive interference in an election in American history,” White House counsel Pat Cipollone asserted to senators. “And we can’t allow that to happen.

“They’re asking you not only to overturn the results of the last election, but as I’ve said before, they’re asking you to remove President Trump from an election that’s occurring in approximately nine months.

“They’re asking you to tear up all the ballots across this country on their own initiative, take that decision away from the American people.”

Mr Trump’s lawyers also aim to put Mr Biden on the defensive as he campaigns for the Democrat presidential nomination.

From the White House, Mr Trump tweeted: “Any fair-minded person watching the Senate trial today would be able to see how unfairly I have been treated and that this is indeed the totally partisan Impeachment Hoax that EVERYBODY, including the Democrats, truly knows it is.”

The opening of the defence’s case comes after a three-day presentation by House Democrats.

As they wrapped up on Friday, they asserted Mr Trump will persist in abusing his power and endangering American democracy unless Congress intervenes to remove him before the 2020 election.

They also implored Republicans to allow new testimony to be heard before senators render a final verdict.

Adam Schiff, the lead Democratic impeachment manager, urged: “Give America a fair trial. She’s worth it.”

Mr Schiff closed Democrats’ case after methodical and impassioned arguments detailing charges that Mr Trump abused his power by asking Ukraine for politically motivated inquiries into political rivals, then obstructed the Congress investigation into the matter.

Mr Trump’s lawyers contend he was within his rights as president when he asked Ukraine for the investigation.

Defence lawyers are expected to press the argument that Mr Trump is a victim not only of Democratic outrage but also of overzealous agents and prosecutors.

In response to allegations that he invited foreign interference, they have already argued it was no different from Hillary Clinton’s campaign’s use of a former British spy to gather opposition research on Mr Trump in 2016.

Acquittal is likely, given that Republicans hold a 53-47 majority in the Senate, and a two-thirds vote would be required for conviction.

Mr Trump’s team began their legal arguments on Saturday but only a short hearing was planned, and they will continue their case on Monday.

The president is being tried in the Senate after the House impeached him last month on charges he abused his office by asking Ukraine for the investigations at the same as time the administration withheld hundreds of millions of dollars in military aid.

The second article of impeachment against Mr Trump accuses him of obstructing Congress by refusing to turn over documents or allow officials to testify in the House inquiry. – Associated Press