Donald Trump’s impeachment trial: What do we know so far? 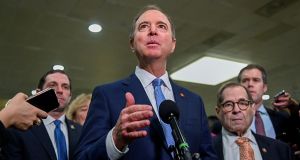 House of Representatives managers Adam Schiff and Jerry Nadler speak to reporters on the fourth day of the Senate impeachment trial of Donald Trump on Friday. Photograph: Erin Scott/Reuters

What happened this week?

The impeachment trial of Donald Trump began in earnest in the US Senate. While technically it opened the previous week when the chief justice of the supreme court and senators were sworn in, Tuesday was the first full day of proceedings.

I thought Trump had already been impeached?

Yes, Trump was impeached by the House of Representatives on December 18th. He was charged with two articles of impeachment – abuse of power and obstruction of Congress – over his dealings with Ukraine following weeks of private and public testimony. Under the US constitution, the process has moved to a trial in the Senate, where a two-thirds majority is needed to convict him and remove him from office.

How did the trial begin?

On Tuesday, the Senate’s top Republican, Mitch McConnell, proposed a resolution setting out the rules of the trial. Though his resolution passed after a marathon 13-hour session, Democrats tabled almost a dozen amendments. Their aim is to subpoena documents and witnesses during the trial. Although the amendments were defeated, some Republicans have indicated that they could vote to subpoena witnesses at a later point.

On Wednesday, Democrats began their 24 hours of allocated time to present their opening arguments over three days. Led by House intelligence chairman Adam Schiff, seven House impeachment managers argued that Trump deserves to be removed from office by trying to encourage Ukraine to investigate his political rival Joe Biden, and linking that to promised military aid for the country.

How did the Democrats fare?

Schiff in particular put forward a strong case, effectively displaying evidence that was admitted during last autumn’s impeachment inquiry. Among the key strategies was a forensic dissection of the two articles of impeachment. The Democrats argued that impeachment does not necessarily require a criminal act to be committed, citing examples from constitutional history. They also defended former vice-president Joe Biden’s conduct in the Ukraine crisis – perhaps an attempt to pre-empt arguments from the White House side that Biden’s son’s appointment to a Ukrainian gas company when he was vice-president is the real issue.

It is difficult to gauge. Senators were forced to sit in the chamber, without phones or other communications, for hours and late into the night. Some made vigorous notes, others stared inscrutably into the distance. During breaks in proceedings many gave brief media interviews, with several Republicans suggesting their opposition to impeachment had not changed.

Schiff in particular though has become something of a hero to the left. The hashtag #RightMatters was trending on Twitter briefly following his powerful closing statement on Thursday night when he paraphrased Ukrainian-born witness Alexander Vindman, who told the impeachment inquiry in November about a conversation with his father when he described how, in America, “right matters”.

Counsel for the president will begin their 24-hour slot, setting out a defence of the president, most likely beginning on Saturday. Like their Democratic counterparts they can take up to three days to present their opening arguments. Unusually, the Senate will sit on Saturdays for the duration of the trial, according to the chamber’s rules on impeachment.

Following the opening statement, senators will have 16 hours to ask written questions, followed by four hours of debate, split evenly between the two sides. At this point a vote on witnesses is possible.

How long will the trial last?

McConnell favours a swift trial, and aims to conclude before the State of the Union address on February 4th. This may also suit four Democratic senators who are running for the Democratic nomination for president, and are due to be in Iowa on February 3rd for the first-in-the-nation caucus.

However, much depends on the issue of witnesses. McConnell has signalled that he will hold a vote on whether to call witnesses after the first stage of the trial. Should the Senate vote in favour, it would likely last several more weeks.