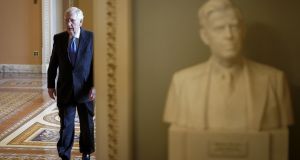 Counsel representing Donald Trump will begin setting out their opening arguments on Saturday in the impeachment trial of the president, as Democrats made a final push on Friday to convince a handful of Republicans to call witnesses and documents.

The seven Democratic impeachment managers mostly focused on the president’s alleged obstruction of Congress – the second article of impeachment against him – as they argued that Mr Trump should be removed from office .

At the start of the third and final day of opening arguments, Democrat Jason Crow accused Mr Trump of “extortion” by withholding aid to Ukraine in exchange for the government investigating his political rival, Joe Biden. Mr Trump only released the aid “after he got caught”, he said.

Counsel also rebuffed arguments about executive privilege – the notion that presidents have overarching power under the constitution – in anticipation of a strategy likely to be used by Mr Trump’s legal team to defend his actions. “You cannot use executive privilege to hide wrongdoing or criminality or impeachable misconduct,” California Democrat Adam Schiff said.

The focus will now switch to the president’s legal team, which will begin its allocated 24 hours of speaking time on Saturday morning. The team has three days, excluding Sunday, to make its case, though it is unclear if it will use all its assigned time.

In a sign that Saturday’s session could be curtailed, Mr Trump tweeted on Friday that he believed Saturdays were “death valley” for television, suggesting that the team might save the bulk of their arguments for Monday and Tuesday.

Mr Trump was impeached last month by the Democratic-controlled House of Representatives over his dealings with Ukraine, specifically his efforts to persuade the Ukrainian government to investigate former vice-president Mr Biden.

Mr Trump is also facing new questions about his role in a smear campaign against former US ambassador to Ukraine Marie Yovanovitch. ABC reported that a recording appears to capture Mr Trump ordering the diplomat to be fired.

Mr Trump, who addressed a large annual anti-abortion rally in Washington DC on Friday, eviscerated the impeachment process on Twitter. “The Do Nothing Democrats just keep repeating and repeating, over and over again, the same old “stuff” on the Impeachment Hoax,” he tweeted. “They want to use up ALL of their time, even though it is the wrong thing to do. They ought to go back to work for our great American people!”

He also retweeted posts by several Republican senators expressing scepticism about the evidence they have heard so far in the trial.

While most Republicans are expected to vote to acquit Mr Trump, a small group of senators have signalled that they are open to calling witnesses. Speaking on his way to Friday’s session, Lamar Alexander of Tennessee said he would wait until senators had the chance to ask written questions next week before making his decision.

Other senators who may endorse a vote for witnesses and documents to be subpoenaed include Susan Collins of Maine, Utah’s Mitt Romney, and Lisa Murkowski of Alaska.