Pall hangs over Germany ahead of Auschwitz anniversary 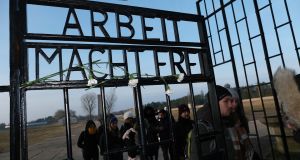 Visitors at the Sachsenhausen concentration camp memorial in Oranienburg, Berlin. Sachsenhausen was the first camp to test the use of gas chambers. Photograph: Sean Gallup/Getty Images

On Monday some 200 survivors of Auschwitz-Birkenau will have a stark message for the world when they gather one last time, to mark the 75th anniversary of the liberation of the Nazi death camp.

“We have a dark premonition because we know” is the motto of this year’s gathering, as new waves of anti-Semitism, populism and nationalist extremism spread across Europe and the world.

Amid efforts by some countries to reframe their war responsibility or relativise Holocaust horrors, the urgent warning from the final eyewitnesses is clear: beware the beginnings.

If the Auschwitz gas chambers are the end, the beginnings can be found 570km northeast: a grand villa, glowing bright in the flat winter sun, on the shore of the calm Wannsee lake outside Berlin.

Despite decades of “never again” campaigns and education, the last years have seen a series of high-profile anti-Semitic attacks

It was here on January 20th, 1942, during a brisk 90-minute breakfast meeting, that 15 senior Nazi officials and bureaucrats collated and streamlined efforts to murder Europe’s Jews.

“The meeting was conducted very quickly and with much courtesy, the waiters served cognac,” recalled Adolf Eichmann during his trial in Israel in 1960. He was made logistics man for what he called the “killing business” and kept minutes of the meeting, all copies of which were to be destroyed.

One copy survived and is stored in the foreign ministry; villa visitors can inspect a facsimile detailing “ . . . this final solution for the European Jewish question considers 11 million Jews”.

This week a new €2 million exhibition was unveiled at the Wannsee villa, casting fresh light on the blueprint for the Holocaust. The exhibition is a complete departure from its predecessor, criticised by many visitors for being text-heavy and off-putting.

Museum director Hans-Christian Jasch says the aim now is to encourage visitors to linger longer and reflect on how the Holocaust was not simply a top-down endeavour.

“There was a high level of societal participation,” he said. “Many motives are documented as to how ordinary people participated in the murder of Jews.”

Just as the orders were not carried out in isolation, the new exhibition highlights the “conducive political climate” for anti-Semitism at the time, which made possible the persecution of ethnic minorities and the Jewish population.

As well as the new exhibition, the Wannsee Conference museum has a new seminar programme for a wide range of visitor groups, from police to nurses, to discuss reacting to ethical questions then and abuses of power in their working lives today.

Watching the opening of the new exhibition with a wary gaze was Éva Pusztai-Fahidi. The 95-year-old Auschwitz survivor suggested the Hungarian Jews in her homeland were “hypnotised” by the Nazis. Even when discriminatory anti-Jewish laws came into effect, curtailing their rights and squeezing them out of society, they couldn’t believe the looming danger.

Despite converting to Catholicism, she was rounded up with her parents and sister and, on July 1st, 1944, arrived in Auschwitz.

She was the only one of her family to survive; in total she lost 49 relatives. It was 59 years before she spoke of her hellish experiences.

“The SS drove people into the gas chambers with flamethrowers, people knew they were facing their death and tried to struggle, wailing a lot,” she said. “The dogs barked and the SS set them on the people. There were many children, so many children.”

As Monday’s anniversary approaches, a burden hangs over Germany. Despite decades of “never again” campaigns and education, the last years have seen the rise of the far-right populist Alternative für Deutschland and a series of high-profile anti-Semitic attacks: on Jewish schoolchildren, on young kippa-wearing men in Berlin, on a rabbi in Hamburg and more.

Last October, a 27-year-old German man killed two people in the eastern city Halle while trying to gain access to the city synagogue during Yom Kippur ceremonies. Only luck and a reinforced door kept him out, sparing Germany a bloodbath.

Like many other survivors, Éva Pusztai-Fahidi is ambivalent about the direction of the world ahead of Monday’s Auschwitz anniversary.

“In many ways my generation, and survivors in particular, were more attuned to the dangers,” she said. “I know that as soon, anywhere, it starts with ‘dirty Jew’ it ends in a crematorium.”