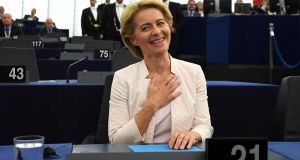 Ursula von der Leyen reacts after the European Parliament voted in favour of her as the new European Commission president. Photograph: Patrick Seeger/EPA

Speaking in the debate on the ratification of the German defence minister’s nomination for the job – which was approved by 383 votes to 327, with 22 abstentions – Von der Leyen sent a conciliatory message to London that she would support another Brexit extension “should more time be required”.

Von der Leyen, who will now start to put together a commission team, will also be in the market for a new secretary general for the commission after controversial incumbent Martin Selmayr, also a German, on Monday night told colleagues he would be standing down.

In the course of the debate there were significant straws in the wind as to Von der Leyen’s likely fate. The Italian Five Star Movement MEPs indicated support, with some of the populist League representatives also positive. Socialists were clearly split but Renew gave its strong backing.

But, annoyed at Von der Leyen’s apparently hardening attitude to rule-of-law violators, Polish MEPs in the right-wing ECR group made clear their opposition. Several Polish MEPs complained bitterly that there was no difference between her and hated commission vice-president Frans Timmermans, who has led for the commission on the rule-of-law issue. His nomination for the commission presidency by the S&D group had been blocked at the summit two weeks ago largely on the insistence of the Poles.

Timmermans, who will be reappointed as a commission vice-president, will today unveil a new EU rule of law mechanism for policing wayward states likely to provoke further rage in Warsaw and Budapest.

The Greens were unmoved in their opposition to Von der Leyen , adamant, despite her strong commitments that climate issues would be top of her agenda, that she was not prepared to do enough on the issue. Dublin MEP Ciarán Cuffe observed wryly of her impassioned speech that – like all politicians, he feared – Von der Leyen “campaigns in verse, but governs in prose”.

Her support for a Brexit extension was warmly endorsed by British Liberal MEP Caroline Voaden, who urged a “long extension so that Britain can remain a member of the European family”. British Labour MEP Claude Moraes welcomed her “pragmatic” approach, while another, veteran Richard Corbett, urged another extension “because the British people are changing their mind on Brexit . . . Keep the door open.”

Tory MEP Geoffrey Van Orden said Britain would be leaving on October 31st, but “let’s ensure that it is on good terms”, he said, urging negotiations.

In her speech Von der Leyen put a heavy emphasis on action on climate change. She said that EU targets of reductions of 40 per cent in greenhouse gas emissions by 2030 are insufficient and that she would argue for cuts of 50 to 55 per cent by that date.

She promised legislation and a “Green deal for Europe” programme within 100 days of her election.

“Emissions must have a price that changes our behaviour,” she insisted, promising a transition fund to support those countries left behind.

The incoming commission president also spoke strongly of the social dimension of the single market economy, a traditional reiteration of the values of her Christian Democratic party and EPP. “It is not people that serve our economy but the economy which serves our people,” she said. And she insisted that the giant digital companies must be required to pay their fair share of taxes for the many services they enjoy.

“In the single market economy,” Von der Leyen said, “everyone deserves a minimum wage that pays for a decent living.”

Pointedly addressing the Polish and Hungarian delegations, she said there  could be no compromise on the rule of law. On migration and asylum she promised to bring forward new reforms of the Dublin regulation, insisting that the EU remains based on solidarity and burden-sharing.

In what may be one of his last speeches to the European parliament, Nigel Farage, leader of the Brexit Party, denounced her programme as “an updated form of communism in which the state controls everything and member state parliaments cease to have any relevance”.

He said she had just made Brexit “more popular in the UK – thank God we’re leaving”.

GUE MEP Marisa Matias said that politics should be about choices. Von der Leyen’s choice was to put the interests of the German arms industry ahead of the planet.

Joachim Kuhs (Alternative for Germany) and Ruza Tomasic, a Croatian member of the ECR, complained bitterly that Von der Leyen, a Christian Democrat, had turned her back on the continent’s Christian roots.

And, in a moment of intense pathos, Flemish MEP Assita Kanko, who has said she was a victim of female genital mutilation – one of 500,000 in Europe – denounced prevailing attitudes of politicians, which she said amounted to “look away”.

“How are you going to protect women?” she asked Von der Leyen.

1 Chief medical officer urges people not to visit hardware stores
2 Impact of coronavirus ‘overwhelming’ in Republic but for public-health controls
3 ‘When I look at the viral loads we find in elderly people, it is mind boggling’
4 Coronavirus: Britain on course to be European country worst-hit
5 Doctors sent to help at Cavan hospital after up to 70 staff infected with coronavirus
Real news has value SUBSCRIBE