Somalia to establish diaspora award in memory of journalist 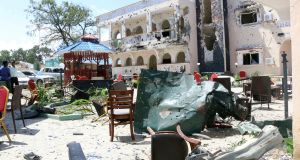 Asasey Hotel in Kismayo, Somalia: 26 people, including Somali-Canadian journalist Hodan Nalayeh and her husband Farid Jama, were killed there in an attack by Al Shabaab. Photograph: AP

Somalia’s ministry of foreign affairs is to set up an award in honour of Somali-Canadian journalist Hodan Nalayeh, who returned to the Horn of Africa country last year to tell positive stories, but was killed in a terrorist attack on Friday.

Foreign minister Ahmed Awad said the annual award would be in honour of Nalayeh’s “inspirational” life and would recognise an “outstanding” individual from the Somali diaspora.

“Having now watched Hodan Nalayeh’s inspiring and uplifting reports I regret that I had never met her to tell her how proud we are of her and her contribution,” Mr Awad wrote on Twitter.

Nalayeh (43) died after a suicide bomber drove a vehicle packed with explosives into the Medina Hotel in the port city of Kismayo. Another of the 26 victims was her husband Farid Jama, along with Kenyans, Americans, Tanzanians, local politicians and a fellow journalist, Mohamed Sahal Omar, a reporter for Kismayo’s SBC TV.

Nalayeh was born in Somalia and but family moved to Canada when she was six. Last year she decided to permanently move back to Somalia. She had previously founded YouTube-based Integration TV, which covered issues of relevance to the Somali diaspora.

Speaking to her Somali YouTube viewers, she said she wanted to use the channel to show that Somalis could be “bigger than the stories that have been defined for us around the world as Somali people. We can achieve goodness and greatness.”

Shahed Amanullah, who worked with Nalayeh promoting Somali-American start-ups, told The Irish Times how excited the journalist had been to return to the country of her birth. “She wasn’t reckless at all – she knew the risks. But nothing gave her more pleasure than to find the metaphorical flowers coming up from the rubble,” he said.

“She wanted the world to see what she did: a country and people with vast, untapped potential.”

From the Kismayo book fair on July 7th, Nalayeh tweeted: “Learning to enjoy the simple life of living back home. I love attending events that stimulate the mind and leave you wanting to do more for your society!”

On July 8th, she tweeted photos of the sea, taken in Kismayo. “People save all their lives to have a retirement by the beach, yet, we have plenty of it and cannot see its value. Let’s appreciate the beautiful blessings we have,” she wrote.

Somalia is a Horn of Africa country with a population of roughly 15 million. Since it gained independence in 1960, it has struggled with civil war, famine and widespread corruption.

Since its 2006 founding, Al Shabaab has gained territory and terrorised civilians, while carrying out brutal attacks. In October 2017, more than 500 people were killed by a bombing carried out by the terror group in the capital city, Mogadishu.

Journalists have also reported intimidation both from the government and Al Shabaab. Reporters Without Borders put Somalia at 164 of 180 in the 2019 World Press Freedom Index.