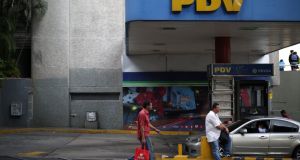 A pedestrian walks next to a PDVSA fuelstation in Caracas, Venezuela on Monday. Photograph: Andres Martinez Casares/Reuters

The United States dramatically increased pressure on the regime of Venezuela’s Nicolás Maduro on Monday, announcing sanctions on the state-owned oil company PDVSA.

Treasury secretary Steve Mnuchin said the measures were being taken so that “Maduro and his cronies . . . can no longer loot the assets of the Venezuelan people”.

“The US is holding accountable those responsible for Venezuela’s tragic decline,” he said. “We will continue to use all of our diplomatic and economic tools to support interim president[Juan] Guaidó, the National Assembly and the Venezuelan people’s efforts to restore their democracy.”

The move comes less than a week after the White House recognised opposition leader Mr Guaidó as the interim president of Venezuela after disputed elections led to the swearing-in of Mr Maduro earlier this month.

The sanctions are likely to heap pressure on the Maduro regime. Venezuela has the largest store of proven oil reserves in the world and has been hit badly by falling oil prices in recent years.

PDVSA’s refinery subsidiary Citgo, which is based in Texas, is Venezuela’s largest foreign asset.

But Mr Mnuchin said that Citgo would be able to continue to operate in the United States provided funds go to a blocked account.

Asked if President Donald Trump was considering military action in the country, national security adviser John Bolton said that “all options are on the table”.

As the White House made the announcement in Washington, in Caracas Juan Guaidó ordered Congress to begin naming new directors to the board of the state-owned company.

PDVSA is Venezuela’s largest source of revenue, and the move by Washington was largely perceived as an effort to increase pressure on Mr Maduro to resign.

The 56-year-old leader, who succeeded Hugo Chávez after his death in 2013, has dismissed America’s move to recognise Mr Guaidó as president, a move that was followed by Canada and several Latin American countries.

But so far Mr Maduro has held strong, and the military has continued to back him. Mr Bolton expressed optimism on Monday that members of the military could begin to abandon Mr Maduro, however.

“Our assessment based on numerous contacts on the ground is that the rank and file of the Venezuelan military is acutely aware of the desperate economic conditions in the country and we think they look for ways to support the National Assembly government,” he said.

Secretary of state Mike Pompeo urged United Nations members to “pick a side” in the escalating political crisis in Venezuela at a meeting of the UN Security Council in New York on Saturday.

Senator Marco Rubio, who has played a central behind-the-scenes role in formulating the White House policy on Venezuela, said that the sanctions would help the Venezuelan people.

“The Maduro crime family has used PDVSA to buy and keep the support of many military leaders,” the Florida senator said. “The oil belongs to the Venezuelan people, and therefore the money PDVSA earns from its export will now be returned to the people through their legitimate constitutional government.”