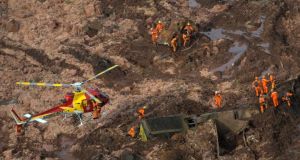 A rescue crew works through the aftermath of the dam burst in Brumadinho, Brazil on January 25th Photograph: Washington Alves/Reuters

Brazilian rescuers have found seven bodies of people swept away by a burst tailings dam and more are expected to be found, with about 200 people still missing, Brumadinho Mayor Avimar de Melo Barcelos told TV channel GloboNews on Friday.

The owner of the iron ore mine, Vale SA, said 300 workers were in the area at the time of the disaster, mostly having lunch, and 100 have been accounted for so far.

A statement from the fire brigade issued in Belo Horizonte city said scores of people were trapped in areas by the river of sludge released by the dam failure.

Vale said there were employees in the administrative buildings of the dam that were covered by the surge of mud and water and there could be casualties in that area.

The mud hit parts of the local community Vila Forteco, near the town of Brumadinho, where families were told to evacuate their homes in low-lying areas, authorities said.

Helicopters plucked people covered in mud from the disaster area, including a woman with a fractured hip who was among eight injured people taken to hospital, officials said.

Television reports showed people running away as the dam broke, and nearby fields with bean crops destroyed by packed mud.

The region is still recovering from collapse of a larger dam in 2015 that killed 19 people. In that incident, a dam owned jointly by the Samarco Mineracao SA venture between Vale and BHP Billiton broke in the same region of Minas Gerais state, burying local homes in Brazil’s worst environmental disaster.

Photos on G1 and other local news websites, some credited to the fire department, showed a vast area covered in sludge with people walking in ankle deep mud. Images showed firemen rescuing at least three people from the mud.

A representative of the civil defence agency in the nearby town of Brumadinho located about 10km from the dam said they were evacuating homes in the lower district by the river, but the mud had not arrived there.

The Inhotim Institute, an outdoor contemporary art museum in a park about five kilometres from Brumadinho, evacuated visitors and closed its doors out of safety precautions.

Brazil’s new right-wing president Jair Bolsonaro dispatched three ministers to the disaster area to see the damage and will visit himself on Saturday, his chief spokesman said. Former environmental minister and presidential candidate Marina Silva said Brazilian authorities and private miners had not learned anything from the 2015 disaster and called it unacceptable.

“Three years after the serious environmental crime in Mariana, with investigations still ongoing and no-one punished, history repeats itself as tragedy in Brumadinho,” she said in a Twitter post. – Reuters