France and Italy’s relationship is close to breaking point 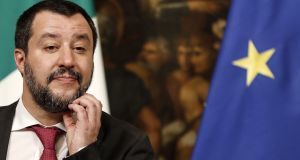 Historically and culturally, France and Italy are extremely close. Trade between the two countries represents a whopping €200 million daily. Yet relations between them have deteriorated almost to breaking point.

The French foreign ministry summoned the Italian ambassador for a dressing down this week, after Luigi Di Maio, the leader of Italy’s populist Five Star Movement (M5S), as well as a deputy prime minister and minister for economic development, labour and social policy, blamed France for the migrant crisis in the Mediterranean.

France’s ambassador to Rome was summoned in a similar fashion twice last year, when tempers frayed over a border incident and Italy’s refusal to allow the migrant ship Aquarius to dock.

“If today people are leaving, it’s because certain European countries, chief among them France, never stopped colonising dozens of African countries,” Mr Di Maio said on January 20th, calling for EU sanctions against France. “France prints the currency, the colonial franc, in dozens of African countries, and with this currency they finance the French debt . . . If France didn’t have the African colonies, she would be the world’s 15th economic power, but she’s among the first because of what she’s doing in Africa. ”

Mr Di Maio’s coalition partner Matteo Salvini, head of the far-right Lega, and who is also a deputy prime minister and the minister of the interior, added his own insults, calling on his Facebook page for the French to “liberate themselves from a very bad president in the next European elections”. Emmanuel Macron “preaches about solidarity, but turns back thousands of migrants”, Mr Salvini said.

Mr Macron has portrayed European elections in May as a contest between his camp, which he defines as liberal, pro-European and progressive, and Mr Salvini’s, which he portrays as narrow-minded, nationalist and populist. Last summer, he referred to the M5S-Lega coalition as “leprosy”.

On January 7th, Mr Di Maio urged French gilets jaunes demonstrators to “hang in there”. He offered them logistical support to create a website comparable to the Rousseau platform used by M5S to come to power.

“The M5S platform advocates shutting down parliament and replacing it with direct democracy, because the politicians are stuffing their pockets. The gilets jaunes have invented nothing new,” says Victoire Maurel, director of projects at the pro-EU think tank Volta Italia.

Salvini and Di Maio have different reasons for antagonising the French. “Salvini is allied with [French far-right leader] Marine Le Pen. He wants to lead the nationalists in Europe, and he and Macron are sworn enemies,” says Ms Maurel.

“Di Maio is losing ground to Salvini, and he has understood that being anti-French pays politically, so he’s using outrageous statements as a publicity stunt,” Ms Maurel continues. “Confrontation is . . . their strategy for the European election campaign, so we’re likely to see more of this in coming weeks. They’ve found the perfect enemy.”

The tension between France and Italy started before Macron, Salvini and Di Maio came to power. Italy resented French intervention in Libya, a former Italian colony. Italian pride was also hurt when the French snapped up €52.3 billion worth of Italian companies in the decade between 2006 and 2016, particularly during the 2008 economic crisis.

There has been further resentment over Mr Macron’s resistance to the sale of a French STX shipyard to the Italian company Fincantieri.

In Moscow for the World Cup final last summer, Mr Salvini announced he was rooting for Croatia. The French team had so many Africans that it wasn’t really French, he explained. “I heard the same thing from ordinary Italians,” Ms Maurel recalls. “Salvini and Di Maio have touched a chord. One senses love, fascination, rivalry and perhaps some jealousy on the part of Italian people.”

Mr Macron and the previous Italian prime minister, Paolo Gentiloni, had envisioned a “Treaty of the Quirinale”, similar to the one signed by France and Germany this week. The annual Franco-Italian summit did not take place last year, and the treaty is on hold. So is the plan for a high-speed train between Lyon and Turin.

Italy also backtracked on an agreement to lend the Louvre paintings by Leonardo da Vinci for an exhibition marking the 500th anniversary of the death of the Renaissance genius. Leonardo spent the last four years of his life in France, under the protection of King François I.

“Leonardo was Italian,” Italy’s culture minister, Lucia Borgonzoni, a member of Mr Salvini’s party, insisted when she cancelled the loan. Sending the paintings to Paris would threaten Italy’s national interests, she said.