Brexit: Backstop will be revised if UK moves towards customs union, Juncker tells May 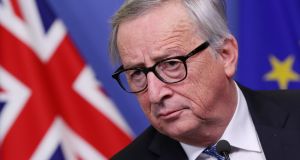 European Commission president Jean-Claude Juncker has told British prime minister Theresa May in a private phone call that shifting her red lines in favour of a permanent customs union is the price she will need to pay for the EU revising the Irish backstop.

Mr Juncker told Mrs May that, without a major shift in the prime minister’s position, the current terms of the UK’s withdrawal agreement with the EU were non-negotiable.

Details of the call, contained in a leaked diplomatic note, emerged as Mr Juncker’s deputy, Frans Timmermans, said there had been no weakening of the resolve in Brussels in support of Ireland, and accused Tory Brexiteers of a “cavalier” approach to peace.

“Let me be extremely clear: there is no way I could live in a situation where we throw Ireland under the bus,” Mr Timmermans said. “As far as the European Commission is concerned, the backstop is an essential element for showing to Ireland and to the rest of Europe that we are in this together.”

The backstop is a provision in the withdrawal agreement aimed at avoiding a hard Border in Ireland unless and until alternative arrangements are put in place. It has emerged as a main obstacle in Mrs May’s attempts to pass the deal through the British parliament.

On Tuesday, the House of Commons will vote on a series of amendments that might variously force the prime minister to delay Brexit or go back to Brussels to demand the ditching of the Irish backstop or a time limit on its enforcement.

Critics of Mrs May’s deal believe that the backstop could trap the UK in an indefinite customs union, limiting the country’s ability to pursue an independent trade policy. Mrs May’s deal was rejected in the House of Commons earlier this month by a historic 230 votes.

At a confidential meeting of ambassadors in Brussels last week, EU officials said there had been no back-channel talks in recent days with Downing Street, nor talks between Mrs May and other heads of state and government.

The European Council’s Danish secretary general, Jeppe Tranholm-Mikkelsen, told the ambassadors he believed the Brexit impasse could continue into February.

“Next week there is a vote,” he said. “There have been no talks in the last week. I do not expect any clarity or any position in the course of next week. This will take time. In the meantime, pressure will increase. On our end we will need to find ways to deal with that.”

A commission official then said: “Yes, difficult, and president Juncker told Mrs May that the backstop was non-negotiable and only if May changed red lines then we can move on the backstop.”

It is understood that one solution discussed by senior officials would be for the backstop to be downgraded to be specific to Northern Ireland, as was originally proposed by the EU, should there be a commitment from the British government to negotiate a permanent customs union with the whole of the UK.

But Mr Timmermans said attempts to rip out the backstop from the withdrawal agreement or put a time limit on it were doomed to fail. Delaying Brexit, he added, did not solve the problem of finding an agreement that could avoid a no-deal scenario.

“The problem is that the House of Commons can say they don’t want a no-deal Brexit but if they don’t say what they want there will be a no-deal Brexit on the 29th,” Mr Timmermans said, referring to March 29th, when the UK is due to leave the EU. “The thing with Europe is that if you know our history so many things have happened in our history that nobody wanted that I think we need to be well prepared for a no-deal Brexit.”

“Come together around an idea, and we will listen,” Mr Timmermans told British MPs. “Mind you, a backstop is called a backstop because it doesn’t have a time limit. If it has a time limit it is no longer a backstop, so that backstop for the European Union is very important. And there can be no uncertainty about that.”

Asked whether Mrs May should respond to Mr Juncker’s advice and move to support a permanent customs union, Mr Timmermans said: “Well, that is an internal debate in the UK. I am just looking at the number 230. Yeah.

“I don’t know what [Juncker] has been saying privately, I am not privy to that. I am just observing the debate and she will have to command a majority in the House if she wants something done.”

Brexiteers were given hope in recent days by the EU’s prevarication over whether a hard Border would be enforced in the event of a no-deal Brexit, and by the suggestion from Poland’s foreign minister, Jacek Czaputowicz, that a five-year time limit could solve the problem of the backstop.

The commission’s first vice-president added he would expect the EU’s leaders to have an open mind towards an extension of the Brexit negotiating period beyond March 29th.

“One of the things that irks me most in all of this is this image that has been created of this vindictive, unfriendly European Union,” he said.