Coronavirus, Brexit transition and antisemitism in the party are among in-tray items 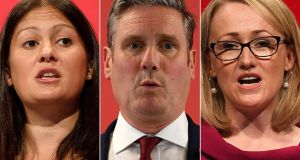 Labour’s new leader will be faced with a full in-tray. At the top of the pile is likely to be:

Should Labour argue the UK’s exit from the single market be delayed because businesses are too busy dealing with the fallout from the coronavirus crisis to prepare for new trading arrangements?

If the new leader argues for a pause in talks, that risks looking like a refusal to accept the referendum result and would give Boris Johnson and new Tory MPs in traditional Labour seats an enormous stick to beat the party with.

However, if the party argues against a postponement, this could alienate Labour’s predominantly pro-EU base and many in the business community.

Coronavirus criticism of the government

Some Labour MPs believe Keir Starmer, the leadership frontrunner, has been missing in the current debate, leaving the floor open to unlikely critics such as Jeremy Hunt and the Daily Telegraph.

But despite criticisms, the government is riding high in the polls and the public appears to be demanding a united front during a national crisis. The new leader will have to decide when it is appropriate to criticise the government – and when to hold back.

Antisemitism in the party

Jeremy Corbyn’s critics wish to see his successor take swift action against anyone who has been found to have made antisemitic comments or implicated in covering up the extent of antisemitism in the party.

An inquiry by the Equality and Human Rights Commission (EHRC) into Labour is ongoing. Jewish community groups have asked that the new leader begins a clear out of those who failed to act swiftly against antisemites. Should the leader wait for a conclusion of the EHRC inquiry, or make a move?

Some Corbyn supporters are calling for the new shadow cabinet to be a “broad church” and offer roles to the departing leader’s supporters. Starmer has already said he would offer a job to his opponent Rebecca Long-Bailey, a Corbyn follower, in a future shadow cabinet. Corbynites will want to ensure it is a significant job and not an effort to sideline her.

Labour under Corbyn had become reliant on the deep pockets of Len McCluskey’s Unite the union, a source of cash that may well dry up if Starmer wins and pushes out McCluskey’s allies Karie Murphy and Jennie Formby. If Starmer is victorious, would Unison step in? Would he be able to rely on members’ donations or might Labour seek corporate donors once again? – Guardian